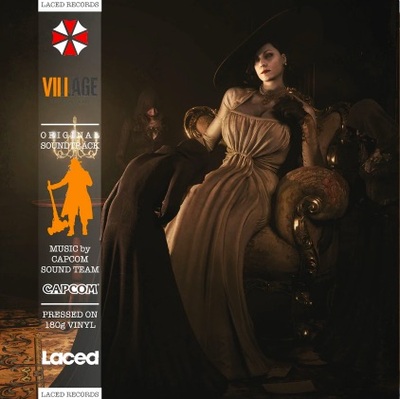 Commemorating the 25th anniversary of the horror game franchise, Laced Records of London has published the Resident Evil Village deluxe double vinyl soundtrack. Preorders are also open at distributor Light in the Attic in Seattle.

The two-disc analog record set is pressed on ochre and black marbled LPs, with artwork by Capcom. Music for the game is by Shusaku Uchiyama, Nao Sato, Kota Suzuki and Azusa Kato. Marcin Przybyłowicz contributes the “Village of Shadows” theme for the intro story book sequence, while Brian D'Oliveira partners with folk artist Aga Ujma on ending credits song “Yearning for Dark Shadows.” Shipping from the publisher is estimated for November.

Capcom's record label Suleputer published the 25-track music score to compact disc last May, available for shipping domestically through CDJapan. The digital soundtrack is available for purchase through Steam, as well as streaming on YouTube Music, Spotify and Amazon Music Unlimited. A "Mini Soundtrack" sampler comes with the Digital Deluxe edition of the PlayStation console release.

Capcom has uploaded a behind-the-scenes video with footage from recording sessions for “Yearning for Dark Shadows.” Resident Evil Village is available for Windows through Steam, and for PlayStation 4 and PS5, Xbox One and Series X|S home consoles.

Set a few years after the horrifying events in the critically acclaimed Resident Evil 7 biohazard, the all-new storyline begins with Ethan Winters and his wife Mia living peacefully in a new location, free from their past nightmares. Just as they are building their new life together, tragedy befalls them once again.

Well, well. #ResidentEvil Village on #vinyl. There you are.