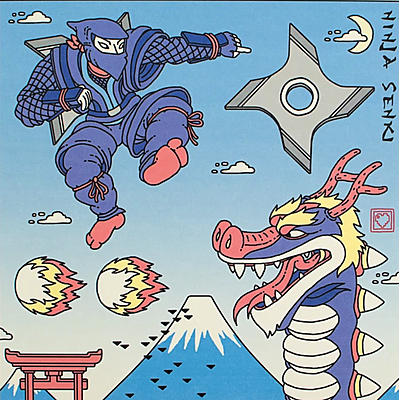 Ninja Senki began as a sprite-based freeware PC title, placing players in the role of shuriken-wielding ninja Hayate. Montreal-based developer Tribute Games rebuilt the action platformer from the ground up in 2016 and published Ninja Senki DX for Windows and Mac operating systems, along with PlayStation 4 and PS Vita.

Both the original and the remake's score for the NES-inspired platformer has been treated to a vinyl soundtrack release by publisher The Yetee, shipping from Aurora, Illinois. Both soundtracks are by Mercenary Kings composer Patrice Bourgeault. Ukiyo-e-inspired cover art for the physical release is by Drew Wise.

The Ninja Senki DX digital soundtrack is available for purchase through Bandcamp, and can be previewed on Tribute Games' YouTube account and the composer's SoundCloud channel. The digital release is streaming on Apple Music and Spotify.

When Kinuhime is slain by a demon, Hayate becomes obsessed with revenge! Casting aside the art of invisibility, the blue ninja unleashes the power of shurikenjutsu onto mythological creatures, demons and other adversaries in his action-filled quest for vengeance...