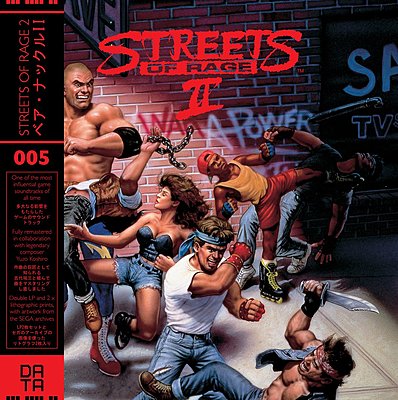 The Streets of Rage 2 vinyl soundtrack reprint ships from Data Discs on two analog records, decorated with archival artwork. Preorders are also available through distributors Light in the Attic in Seattle and PixelCrib of Melbourne, Australia.

Remastered audio previews from the 1992 Sega Mega Drive title are streaming on SoundCloud and Bandcamp. The FM synthesis score from the sidescrolling brawler is by series composer Yuzo Koshiro, with two tracks by Motohiro Kawashima. The remastered digital edition of the soundtrack is available for purchase through Bandcamp, as well as streaming on Apple Music and Amazon Music Unlimited.

In 2015, developer M2 ported the brawler to the Nintendo 3DS portable console, integrating stereoscopic 3D effects, as part of the 3D Classics series. Streets of Rage 2 is available for Windows, Mac, and Linux through Steam, and is included in the Sega Genesis library of games for Nintendo Switch Online's Expansion Pack.

The audio has been carefully remastered using multiple sources, including the original NEC PC-88 files supplied by Koshiro himself, and packaged in original artwork sourced from the SEGA archives in Japan.

Light in the Attic - Streets of Rage 2 Vinyl