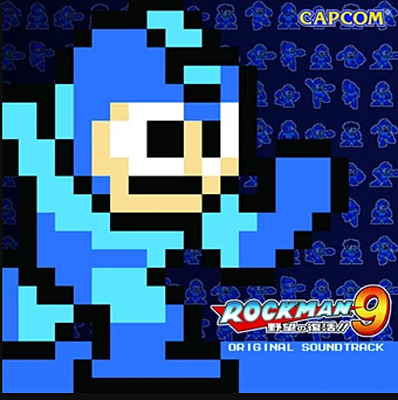 Composer Ippo Yamada served as producer of the Inti Creates sound team during the development of Mega Man 9.

While working at Capcom, he contributed music to Mega Man 7 under the alias of "IPPO." Heading Inti Creates' sound team, dubbed "III," he wrote music and lyrics for Rockman ZX Soundsketch "ZX Gigamix," and produced the arrangement compilation for Rockman 9. Here the musician discusses the process behind leading sound production on Mega Man 9.

The music of Mega Man 9 is often casually referred to as "NES music," but in the liner notes to the soundtrack you mention that the sounds are emulated. What techniques did you use to simulate the NES sound card?

Ippo Yamada: Strictly speaking the soundtrack of Mega Man 9 is not NES music, but to its very core it has been created in the spirit of NES music. We made use of a program that closely resembles the console's sound source, producing very similar waveforms, and thereby were able to make music tracks that sound just like the original.

In the days of Mega Man 1-6, you were challenged to manipulate the audio signals produced by the sound card within the range designated by the restrictions of the hardware. Naturally in making this game we had no hardware restrictions, and drew upon the essence of NES music, composed of three pulse wave channels and one noise channel. Within this conceptual framework we freely went about composing music.

Were there any aspects of the music of the original games that you consciously decided to depart from in creating your own NES Mega Man title?

The game concept itself was this: What would a brand-new NES game look like? For that reason, we did not want to depart drastically from the foundation of the original series. At the same time, in order to make things interesting we were looking to add to the mix a few melodies that were not classically familiar to the Mega Man formula. For instance, the Endless Stage music is something that the NES would not have been capable of.

The Rush Jet theme incorporates the backbeat of the weapon acquisition tune from Mega Man 2. Are there other subtle instances where elements from previous games are embedded in the composition?

The Rush theme is a special case. It describes your ally character Roll's new weapon by blending the shop and get-a-weapon theme together.

Aside from this, a motif of the ending theme incorporates an arranged version of the Mega Man 2 stage select theme. Most of the themes in the game were created with the thought of capturing some quality of previous titles in mind, but consciously making reference to the series by adding particular phrases was restricted to these two themes. You might say Concrete Man's intro sounds a lot like Wood Man's theme. That is about the limit to which we allowed ourselves to cite other games in the series. There might be other similarities, but none were intended to imitate previous themes.

There were aspects of even the late NES titles that were not allowed in Mega Man 9. In terms of gameplay, there is no sliding and no charging of the mega buster. Were these kinds of restrictions enforced in executing the sound design?

Taking away sliding and charging was a way of returning to the framework of Mega Man 2. The game's sound effects reflect the same approach. The sound of charging the mega buster blocks out other square waves, so by eliminating charging from the game we could introduce a lot of other sound effects that would have been obscured, such as the enemy laser shots. This one choice opened the way for a lot of freedom in composing the music, which would have been curtailed by charge-related restrictions.

The soundtrack includes two tracks of sound effects, those that appear in the new game and those that were ported over from previous iterations. What tools were used to generate them?

Did you allow yourselves leeway in including effects that were not possible to generate on the Famicom console?

There are no sounds included apart from those generated by MML. We were looking to work within this concept of a new NES game, so the new aspects are contained within the design elements.

What can you tell us about the history of the Inti Creates? How did it come about that the company formed and when did you form the affiliation with Capcom?

Inti Creates was established as a totally independent small company in 1996. Our first project was Speed Power Gunbike, developed by Club DEP and Sony Music Entertainment. As far as working with Capcom goes, we presented them with the idea for Mega Man Zero and development on the four titles that followed. The company has also developed the Capcom games Mega Man Battle Chip Challenge, Mega Man NT Warrior, EXE N1 Battle Network for Wonderswan Crystal, along with Mega Man ZX and ZX Advent.

Setting out to create a 21st century Mega Man title, did the staff feel that it had enough training as musicians during the 8-bit era that it could authentically revive the style of music from that era?

Sound director [Yu] Shimoda analyzed the audio of the NES Mega Man titles for several months before embarking upon this project, documenting his research and providing these materials for the other sound designers to refer to. We referenced these materials and our familiarity with the series in mind while composing the score.

To what extent did level designs and character art influence the direction of each stage's musical themes.

Consideration of stage design and character design were fundamental to the process of writing the music. The Jewel Man stage music shares with the design of the robot master a certain aloof quality. The Hornet Man stage theme has a bright and cheerfully quality to reflect the atmosphere of the flower park location. The Magma Man song was created with the idea of an impassioned anime theme in mind, while Galaxy Man has the kind of retro-future spaceage quality you might associate with a UFO.

Gradually game composers are receiving more recognition for their work, but is there something to the mystique of codenames like Yuukichan's Papa?

While I was working at Capcom, the company was just beginning to transition from crediting staff members by aliases to their full names. There were cases when contributors were not credited at all, not even during the staff roll at the end of the game. I feel that having one's full name present brings with it a sense of personal responsibility for one's work. From the point of view of the listener, they can rest assured that the composers are staking their reputation on the quality of the product.

My feeling is that it is preferable when magazines and newspapers make it clear who worked on each of the titles, whether by full name or by pen name, so long as they are credited. For instance, while at Capcom I went by IPPO, and I still do.

It is interesting to note that all of the sound designers are credited in the soundtrack manual with the role of computer programming, which is not the kind role you see designated often for musicians. Is this a deliberate reference to the way creating music during the days of the NES was often inseparable from coding?

All the composers on the project are using personal computers to make the score. For Mega Man 9's original soundtrack, all the intstrumentation is electronic. Of the members on the team, I was the only one who had worked during the NES era, though I only began making music once the Super Nintendo had been released.

How did the process of creating music for the arranged album of Mega Man 9 music differ from writing the original soundtrack?

These days, all around the world there are people who are interested in videogame music and are doing their own arrangements. Under such circumstances it is only natural that you try to experiment with something different. For that reason you will find a straightforward electric guitar rock arrangement for the title theme alone. Original soundtracks are fairly easy to prepare, since all you need to do is carefully record the sound source.

For an arranged album there is the arrangement to worry about, taping the musical instruments, vocal recordings, mixing and mastering. Many more resources are required. By all means, compare the two versions for yourself and see what you think.


What can we expect from the arranged album when it arrives in October?

That said, you can expect the arranged album to be more varied in its approach. The genres of music from the '70s and '80s had an impact on the original game titles, and are included here. There are a number of guest arrangers, including Manami Matsumae (aka CHANCHACORIN MANAMI). Also participating are Mega Man 3's Yasuaki Fujita (BUNBUN), Mega Man 7's Makoto Tomozawa, Mega Man 8's Shusuaki Uchiyama and Akari Kaida (Akari Groves) of Rockman & Forte. They each arrange one track.

Can you tell us something to look out for while listening to the music of Mega Man 9, the kind of thing that most listeners might miss unless they are told to look out for it?

I would say keep a look out for its Maga Man-esque qualities. The use of triangle waves on both Concrete Man's stage and Wily Stage 3 are something to listen for. Listen for the low frequency noise found in Quick Man's stage which shows up in Plug Man. There are many classic Mega Man qualities to listen for in the score, so by all means I hope you will enjoy searching them out.

Translation for the article is by Ryojiro Sato. Images courtesy of Capcom and Inti Creates. The soundtrack to Mega Man 9 is streaming on Spotify
Tags
CapcomPlayStation 3SteamNintendo SwitchXbox OnePlayStation 4SpotifyPlayStation Vita
Related