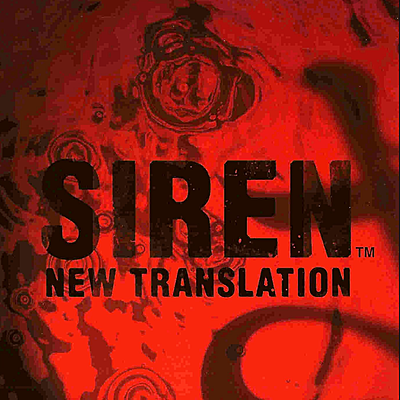 First published in 2004 for the PlayStation 2 home console, and revived in 2016 for the PlayStation 4, Siren is set in the mountain village of Hanuda, Japan. The macabre story centers on a small group of visitors who voyage to the isolated region to discover a mysterious cult, their bizarre rituals, and a group of murderous corpse-people. Called 'Shibito,' these undead horrors follow the call of a siren echoing through the night.

The unique "sight-jacking" system allows the player to see through other characters' eyes. The game's design emphasizes the use of stealth and cunning in surviving a three-day sojourn across Hanuda village. Director Keiichiro Toyama further challenged players by depicting the events out of chronological order. The musical score by Hitomi Shimizu and Gary Ashiya is comprised of ambient sounds, punctuated by chilling vocals and unnerving audio effects.

Siren returned to the village of Hanuda, this time on the PlayStation 3 console. A re-imagining of the series' premise, Siren: Blood Curse (known as Siren: New Translation in Japan) takes an episodic approach to the narrative, akin to TV drama. The 12 episodes introduce an American film crew, increased threats in the form of Shibito, a new combat system, and split screen sight-jacking capabilities.

Hitomi Shimizu has returned to compose the score for Siren: Blood Curse, published to compact disc by Team Entertainment in Japan, along with a separate publication for the original soundtrack from Siren. Here, the composer joins us for a discussion of the music of Siren and her work as a composer for television, films and games.

Thank you for joining us for this discussion of your music. On the manuera.com website, there is a diverse list of credits associated with your discography. Would you say that your other music differs distinctly from that of the Siren series?

Hitomi Shimizu: Since I have worked on so many kinds of projects, it might be difficult to categorize my work as a musician. I've written soundtracks for both movies and television, and in parallel, I perform as a member of Syzygys. This is a duo that includes violinist Hiromi Nishida, and we have published some albums on John Zorn's record label "Tzadik."

When I'm working alone, the music is credited as "Hitomi Shimizu," but when we collaborate, it is for Syzygys. Followers of the duo are not aware that I make this scary music for the Siren series. I think they would be surprised to find out. As a solo musician, I have done everything from horror stories to light-hearted comedies. Siren alone will not provide you with a clear picture of Hitomi Shimizu in a nutshell. 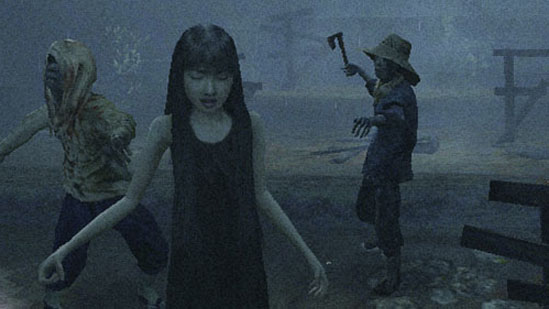 Your music from the 2001 comedy Waterboys won best score at the Japan Academy Awards, and your short film Mt. Head won the top prize at the 27th International Animated Film Festival in Annecy, France. Having worked in live action and animation, could you share with us some of the unique aspects of games as a medium for music?

The major difference is, of course, that in videogames you do not have a fixed sense of time. In animation or live action, there is a smooth, uninterrupted progression of events, and the total duration is predetermined. You don't go to a movie for a second viewing and walk out of the theater saying, "Man, it finished early that time!"

The flow of time is different in games. You can go back and revisit events, or you can choose not to. Those decisions are determined by each player. Time is essential to music, and in most mediums it is fixed in place. The interactive medium is unique in that regard. There is a very special quality having a soundtrack that loops.

When composing for games, I often start by thinking about the loop. The difficulties of working within this convention can be a daunting task for a composer, and it is only found in videogames. Because you are leaving it up to the player to determine just how many times a particular track loops, and at what point the track will end, you are taking out of the hands of the composer the ability to decide how to bring the songs to a natural close.

The two films previously mentioned are lighthearted in tone. By comparison, what are your feelings about survival horror in general?

You know, I'm not all that familiar with the genre. I like John Carpenter and horror movies with female lead characters, such as Suspiria and Carrie.

How did it come about that you were asked to write the music for the original Siren? Was it a significant departure from the kinds of projects that you were accustomed to?

It came as a result of working on the music for a televised series called Gakkō no Kaidan (School Ghost Story), but because it was intended for a general TV audience, the show was rather light on scares. In transitioning to full-blown horror with Siren, it took some time to figure out how to provide the right atmosphere. I had done music for Playstation games by that point, but it was for Harvest Moon — a far cry from survival horror.

Were you offered any specific instructions on the score, or was the style entirely left up to your judgment?

Siren was the start of a brand new franchise, so I received quite a few directions from the sound director at Sony Computer Entertainment. The requests included a number of difficult challenges for a musician, such as "Try not to use any musical notes." "Avoid expressive music, focus on ambient sounds, and try writing tracks that are at least five minutes in length." "Make it sound primeval." While the game was still under development, there were few visuals to go by, so I relied on concept art illustrations and the storyline to inform my vision for the score. 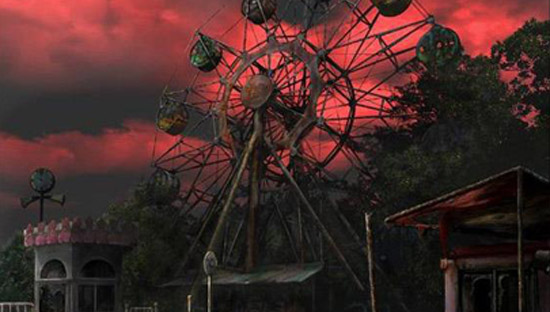 What was your experience working with Gary Ashiya on co-composing the score? Did you actively work together or split the workload and focus on separate goals?

For the most part, I focused on the songs involving vocal components and Gary was responsible for the others. We also consulted with one another from time to time. It was easy to work with him because we come from the same agency and are familiar with each other's strong suits.

What were the leading concerns of director Keiichiro Toyama and scenario writer Naoko Sato in developing a sound for the Siren series?

They were interested in the idea of abstract expression, the dread encountered in nature. Their concept was to represent threats that were not immediately dangerous, but induced a creeping feeling of terror.

Much of the music has an ambient quality. Was this a strategy to imbue the village of Hanuda with its own visceral atmosphere?

Creating a sense of the atmosphere for Hanuda Village was of primary importance. What we discussed together at the first meeting on the project was the how the villagers would chant, and how this custom was passed down over generations. We felt that getting this sound just right was very important. This is why there are voice effects discernible here and there in the background music. People are very sensitive to sound of voices. Placing them where they would not be expected was intended to elicit a sense of fear in the listener.

Did you ever feel like participating in the voice recordings?

Siren: New Translation has introduced storytelling conventions from television programs. Is this a strategy for introducing the series to people who are accustomed to that medium?

This format of downloading the game in parts and playing it episode by episode is a little like watching a TV miniseries. I was very surprised when I first heard about it. I'm a die hard fan of "Lost," and I always want to find out what is coming in the next episode. The idea of having previews in a game of what you would be playing in upcoming episodes sounded like a lot of fun. I guess that's because I'm the type of person who likes to imagine what kinds of situations are lined up before finding out for myself.

A new recording of the well-received song "Hoshingoeika" from Siren appears in Siren New Translation with added percussion. What were your goals in returning to this theme?

Up until this song was completed, I was going back and forth on whether to actually revisit it. However, because the premise of the game is the return to Hanuda Village, I decided to write an arrangement that matched the subtitle of "New Translation." I was delighted that fans of Siren are emotionally attached to the song. The vocal performance by singer Yula Yayoi is quite popular.

For a new instrumental arrangement, I wanted for there to be this sense of bending space and time. To create that effect, this vintage electronic instrument of French original called an "ondes Martenot" fit perfectly. Wakana Ichihashi is one of the few musicians who are adept in its use. I think some people have listened to this song and wondered, "Just what is that mysterious instrument?"

This year Siren is seeing not one, but three original soundtrack albums releases. How did this resurgence come about?

There has been a lot of pent up demand for these albums from people who are really into the Siren series. I am happy to have this opportunity to express my gratitude to them for that.

Finally, as is stated on your website, you are a science fiction enthusiast. If you could be any Star Trek character, who would you be?

You know, I do cosplay sometimes. I'm a bit embarrassed that I just admitted to doing that... Well, maybe I would be a Borg drone, one of the underlings. I guess after all, I yearn to be part of a collective consciousness.

Translation by Kaoru Bertrand. Read it in Japanese on Manuera.com. Hitomi Shimizu's discography can be found on the SYZYGYZ website. Siren is available for PlayStation 4. The Siren: New Translation music score is streaming on Apple Music and Spotify in Japan. Images courtesy of Sony Computer Entertainment.