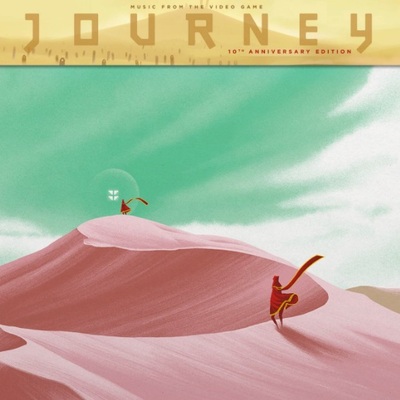 Publisher iam8bit has opened preorders for the 10th Anniversary Edition of the double vinyl soundtrack for ThatGameCompany's Journey, composed by Austin Wintory.

The anniversary release will be pressed to audiophile 180-gram black vinyl, with updated art by Mark Englert. Shipping from the publisher is estimated for the second quarter of 2023. Preorders are also open through distributors Light in the Attic in Seattle, Black Screen Records in Germany, and PixelCrib in Australia.

Published by Sony Computer Entertainment and directed by Jenova Chen, Journey is available for PlayStation 4 and iOS devices. The digital soundtrack is available for purchase through Bandcamp. Annapurna Interactive assisted with the Windows port, distributed through both Steam and the Epic Games Store.

Rarely does a game come along that shatters all convention, revolutionizing our perspective on what interactive entertainment is capable of. Journey, the seminal, groundbreaking and now-legendary opus from developers thatgamecompany and Santa Monica Studios and publisher Sony Interactive Entertainment, is a perfect expression of that.

To celebrate its momentous 10th anniversary, iam8bit is ecstatic to revisit one of the very first (and best-selling) vinyl soundtracks that we minted nearly a decade ago, offering composer Austin Wintory’s passionate, evocative and emotional score on the purest quality pressing possible — 180-gram audiophile black vinyl. We can’t overstate just how immaculate and important Journey’s music is to the greater gaming echelon — a fully orchestrated masterpiece, where robust epicness is complemented by intimate solos — which is exactly why it was the very first video game album nominated for a Grammy. This is a must-have for every vinyl collection, and it’s never sounded better