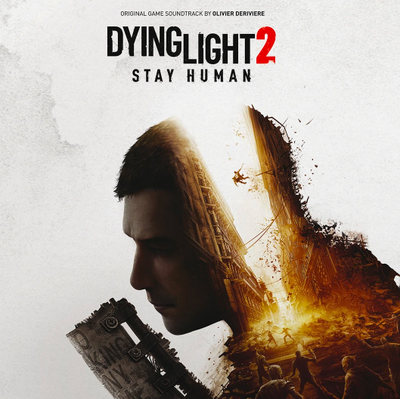 Developed by Techland, action role-playing game Dying Light 2 Stay Human thrusts protagonist Aiden Caldwell into a post-apocalyptic zombie outbreak. The player must employ Caldwell's parkour skills and a range of melee-based weaponry to subdue violent antagonists and map out the open world environment of the City.

Stay Human introduces a sprawling landscape over four times larger than the map of the predecessor, overrun both by the undead and by hostile survivors pitted against each other. Dying Light 2 is due out on February 4th for Nintendo Switch, PS4 and PlayStation 5, Xbox One and Series X/S, along with Windows through Steam.


Featuring a music score by Olivier Derivière, the Dying Light 2 soundtrack album is scheduled to ship on February 11th from publisher Black Screen Records. A veteran in the industry, Derivière's music for videogames began garnering widespread attention in 2004 with the cult classic survival horror title Obscure. The publisher, based in Cologne, Germany, has opened preorders for both the double vinyl soundtrack and two-disc CD release.

The single "Run, Jump, Fight," featuring the London Contemporary Orchestra, can be purchased on Bandcamp and is streaming on Spotify. The 31-track analog record release is pressed on 180-gram vinyl, housed in a gatefold sleeve, featuring key artwork from the game. The vinyl publication is available for preorder through distributors Light in the Attic in Seattle and PixelCrib in Australia.

"I am delighted to have this double vinyl edition of my Dying Light 2 Stay Human soundtrack. On the first disc, you will follow the story of the main character and his personal journey through The city of Villedor. Like in the game, you will discover the different factions and the difficult choices he will have to take. The second disc is more about the world, its environments and dangers but through adversity, there is always time for comfort and joy. It will be a great journey for any listener and, I hope, a real treat for the players" says Olivier Deriviere (Composer)