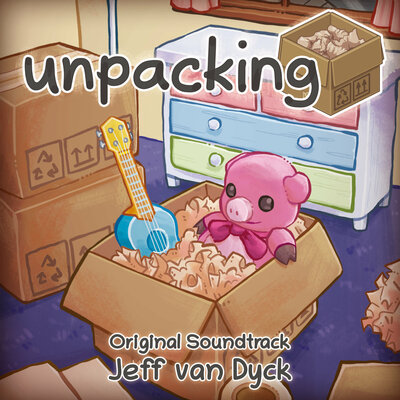 The digital soundtrack for Unpacking, featuring music by Submerged: Hidden Depths composer Jeff van Dyck, is available for purchase through Steam and Bandcamp. Mastering is by Matthew Gray Mastering, with album art by Stacey Richmond. Vocals and lyrics on "Unpacking a Life" are by Wren Brier.

Unpacking is currently available for Windows, Mac and Linux through Steam, along with Nintendo Switch and Xbox One consoles. The soundtrack is streaming on YouTube Music and Spotify.

Unpacking is a zen puzzle game about the familiar experience of pulling possessions out of boxes and fitting them into a new home. Part block-fitting puzzle, part home decoration, you are invited to create a satisfying living space while learning clues about the life you’re unpacking.

We're excited to announce that Unpacking will be available on the PlayStation Store for #PS4 and #PS5 on May 10th! 📦💜🎮 pic.twitter.com/xvziyNbbQp