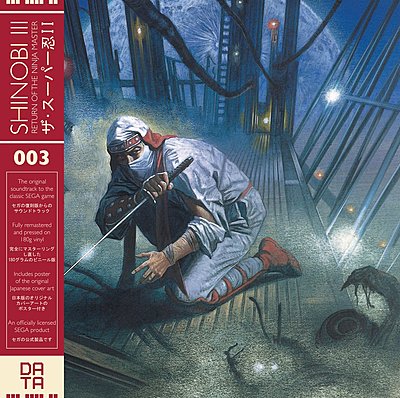 Record publisher Data Discs of London has published the Shinobi III: Return of the Ninja Master remastered score. Available through Bandcamp, the digital soundtrack is decorated with archival Japanese artwork, licensed through Sega.

The music score to Sega's 1993 action title for the 16-bit Mega Drive is composed by Hirofumi Murasaki, Morihiko Akiyama and Masayuki Nagao. All audio is sourced directly from the Japanese Model 1 Mega Drive and captured in 24bit/96kHz.

Shinobi III: Return of the Ninja Master is available for Windows, Mac and Linux through Steam, and a Sega Genesis title included in the Nintendo Switch Online's Expansion Pack.

Shinobi III is a relentless bass-driven soundtrack which, upon its release in 1993, pushed the Mega Drive’s audio capabilities to its limit. Its strong percussive elements are something of a technical marvel and, like all of the greatest soundtracks of the 16bit era, showcases the ingenuity and resolve of game composers when faced with extremely limited hardware.