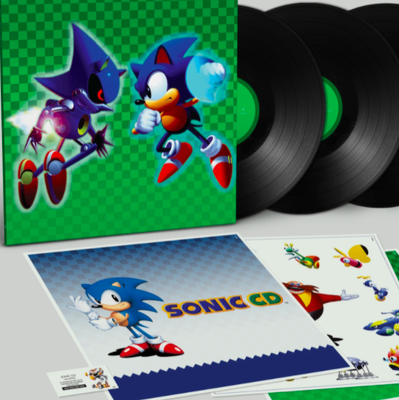 London's Data Discs label published the three-disc Sonic CD vinyl soundtrack in September of 2019, containing the remastered music score from the Japanese edition of the game.


Sonic CD debuted for the Mega-CD home console in 1993 in Japan. Introducing the theme of time warps, Sonic gains the ability to visit the same stages in the past, present and future. To differentiate these locations chronologically, the composers incorporated less advanced, low-fi electronic instruments on stages taking place in the past, harkening back to the more limited specs of the Sega Mega Drive console.

Different soundtracks were developed for the Japanese and English-language releases of the game, with the song "Sonic Boom," composed by Spencer Nilsen, included in the English-language localization of the platformer. Bonus tracks found on the anniversary edition of the soundtrack release feature Jun Senoue's Crush 40 music group. The Opening song and ending theme of the Japanese release are performed by vocalist Keiko Utoku.

It’s time to usher the past into the future in this enhanced recreation of Sonic CD!

Sonic travels to the distant shores of Never Lake for the once-a-year appearance of Little Planet - a mysterious world where past, present, and future collide through the power of the Time Stones that lie hidden within it. Sonic arrives only to find the once beautiful world imprisoned beneath a twisted metallic shell. His arch-nemesis, Dr. Eggman, has come for the Time Stones and with them, will soon have the power to control time itself...

Navigating an Antichamber of Sound and Mysteries