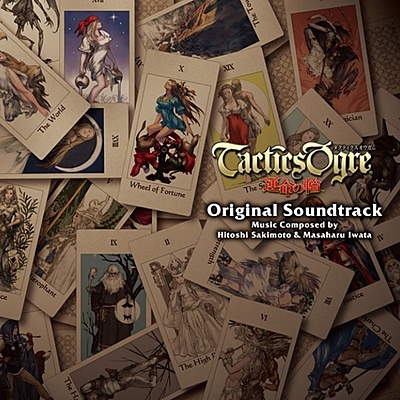 Tactics Ogre: Let Us Cling Together turns 25 this week. The turn-based strategy title debuted on the Super Famicom home console as the follow-up to Ogre Battle: The March of the Black Queen, both directed by Yasumi Matsuno and featuring music composed by Hitoshi Sakimoto and Masasharu Iwata.

Developed by Quest, the strategy game emerged in October of 1995 at the tail-end of the 16-bit console generation. The following year, Tactics Ogre saw a Sega Saturn port with newly recorded voice acting, published by Riverhillsoft. In 1997, Artdink published the Sony PlayStation port in Japan, and Atlus localized the first English-language release of the game.

Directed by Hiroshi Minagawa, Square Enix's enhanced port Tactics Ogre: Let Us Cling Together for PlayStation Portable emerged in February of 2011 and received its own soundtrack album publication. Localization for the English-language release involved Matsuno collaborators Joseph Reeder and Alexander O. Smith of Kajiya Productions, the translators responsible for Vagrant Story, Final Fantasy Tactics: War of the Lions and Final Fantasy XII, the former in collaboration with Rich Amtower and Amanda J. Katsurada.

The Tactics Ogre: Let Us Cling Together four-disc soundtrack CD set is currently available for purchase through the Square Enix online store for North America. The digital soundtrack, featuring cover art by illustrator Akihiko Yoshida, is streaming on Apple Music in Japan.

From the creators of the celebrated Final Fantasy Tactics comes one of the most highly anticipated sequels to the 'Tactics' franchise. Hiroshi Minagawa (Director), Akihiko Yoshida (Character Design), Yasumi Matsuno (Game Design), Hitoshi Sakimoto and Masaharu Iwata (Composers), all key members of the original Tactics Ogre development team, have reunited to deliver the ultimate version of this definitive tactical RPG experience.

In Tactics Ogre: Let Us Cling Together, you will experience a lost tale of political intrigue, conquest, and rebellion. It is your choices through a branching storyline that determine the fate of the Walister Resistance, characters in the game, and the story as a whole. Your rebellion is enhanced with reworked visuals, effects, a re-arranged soundtrack by the original composers, new character growth mechanics, and a new Wheel of Fortune system that adds even more replay value to the game.