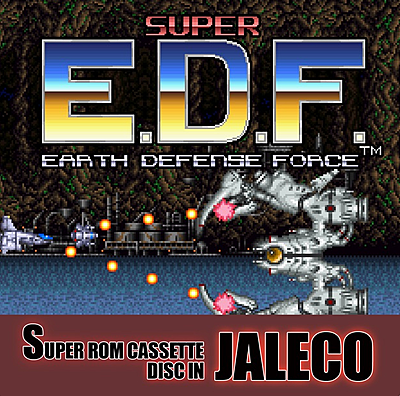 Music publisher Clarice Disc's digital soundtrack release for Earth Defense Force (1991) is available for streaming on the Spotify and Apple Music services. E.D.F was among the first titles listed for the Nintendo Switch Online's Super NES library when the service launched for the hybrid console.

The story of Earth Defense Force centers on the pilots of the XA-1 fighter jets, tasked with protecting the world against hostile alien beings. Known as the Azyma Empire, the enemy forces have constructed an attack satellite capable of devastating earth. The E.D.F. must intercept the Orbital Buster weapon before it is deployed by the empire's colonies located on the lunar surface.

Developed by Jaleco, the horizontal shoot-em-up's nostalgic twenty-minute score made its debut on compact disc in 1991 through the Pony Canyon label. In September, Earth Defense Force joined Hamster Corporation's Arcade Archives library for PlayStation 4 and Switch. All music for the digital release is by composers Yasuhiko Takashiba and Tsukasa Tawada.