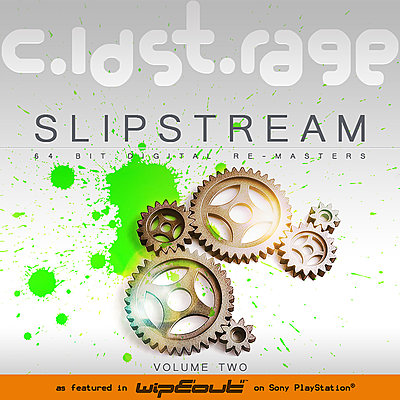 Celebrating the 20th anniversary of WipEout in 2012, game composer CoLD SToRAGE (Tim Wright) published the second volume in his series of albums remastering music from the futuristic racing game.

Electronic music from the album appeared in the 1995 release of WipEout for PlayStation, Windows and Sega Saturn, providing atmosphere to the adrenaline-pumping anti-gravity racing courses of the year 2052. Music from the direct sequel, featuring new tracks and destructible vehicles, also makes an appearance on Slipstream Volume 2.

As with the first volume, 64-bit digital remastering of music from WipEout and WipEout 2097 by Liverpool-based developer Psygnosis are by Shoe Box Under The Shady Pines Studios. The eighteen-track electronica album includes five bonus tracks, composed during the same era and available to listeners for the first time.

Both volumes of Slipstream are available for purchase through Bandcamp, and for streaming through the Spotify and Apple Music platforms.


From the Bandcamp product description:

As with SLIPSTREAM Volume One, this second volume contains 64 bit digital re-mix / re-masters of my tracks from WipEout and WipEout 2097 on all formats (PlayStation, PC etc.). I've also included some SPECIAL remixes and EXCLUSIVE bonus tracks that weren't on WipEout. These tracks were created around the same time, so they share a similar flavour.