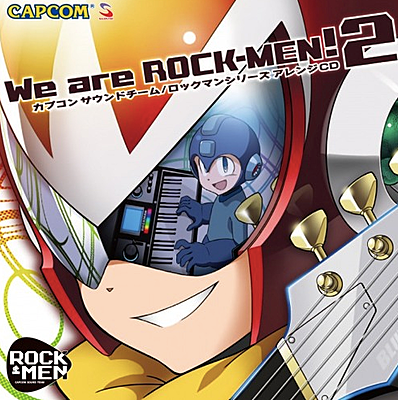 Capcom's Suleputer record label first pressed the rock and roll cover album "We are ROCK-MEN! 2" to compact disc in December of 2012. The Mega Man series arrangement album is available for purchase through Steam and streaming online through Spotify.

ROCK-MEN is composed of music duo Masahiro Aoki and Yasumasa Kitagawa, whose previous collaborations include contributions to the Monster Hunter 3 (Tri) game score. While recording the album, Aoki composed the soundtrack for the Japan-only smartphone game Rockman Xover.

The physical release of the album can be purchased domestically through CDJapan. A crossfade sample trailer is on YouTube, uploaded by the Game*Spark publication in Japan.

For those about to rock, we salute you.

Ten Mega Man Sound Collections and both "We are ROCK-MEN!" albums are available now on Steam! Original tracks and 32-bit era arrangements are included for all your favorite songs (and also Wood Man's stage).