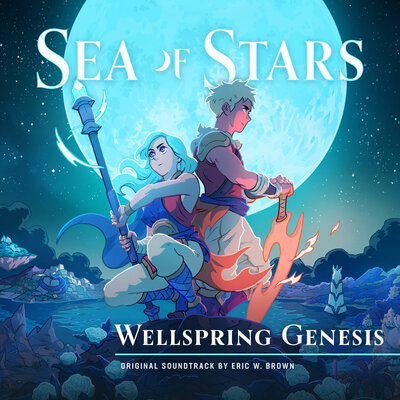 The musician created the soundtrack in two halves. Representing the time shifts encountered when The Messenger transports between epochs, the score combines the 8-bit selections of "The Past" with 16-bit variations of "The Future."

Sabotage's followup title Sea of Stars is a turn-based RPG, inspired by 16-bit classics of the genre. Relating the story of two Children of the Solstice harnessing the power of the sun and moon, the two combine the forces of the Eclipse magic to wage battle against a nefarious alchemist known as The Fleshmancer.


In addition to the traditional turn-based combat, rhythm elements will play a pivotal role in the gameplay. Pressing the action button in sync with animations can increase the damage associated with attacks, while also deflecting attacks targeting party members.

Brown's digital EP "Wellspring Genesis" is comprised of seven tracks, available for purchase through Bandcamp, while "Encounter," "One Last Time," and "Starfaring" are streaming on Spotify. Announced via the Kickstarter crowdfunding campaign, Chrono Trigger composer Yasunori Mitsuda will be contributing music for the game.

Sea of Stars is due out in 2023 for Windows through Steam, Nintendo Switch, as well as PS4 and PlayStation 5 consoles.

Engaging turn-based combat. Pressing the action button in sync with the animations increases damage output while reducing incoming damage. Along with timed hits, combat features multi-character combo attacks, boosting, and a strategic "locks" system offering options to play with different damage types in order to hinder enemies while they are channeling powerful attacks or spells, all in an immersive take on the genre; no random encounters, no transitions to separate battlefields, and no grinding.