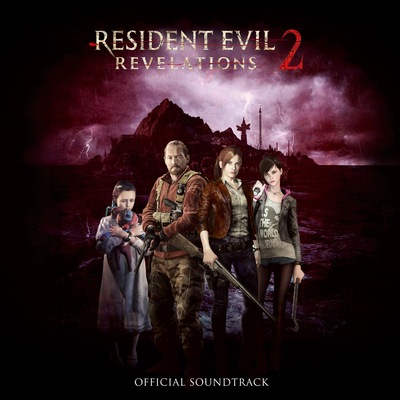 In the first storyline, Moira Burton and Code: Veronica heroine Claire Redfield are captured by the Overseer, a scientist testing a zombie-creating virus activated by fear. In the second storyline, set six months later, Moira's father Barry Burton arrives on the Overseer’s island in search of Moira and Claire. Instead, he discovers mysterious girl named Natalia, who draws him fruther into the Overseer’s sinister plans.

In contrast to the lush orchestral feel of the first Revelations’ score, the sequel takes a subtler, more atmospheric approach, with a greater focus on ambient soundscapes that evoke lingering feelings of dread. Revelations composers Kota Suzuki and Ichiro Kohmoto return, joined by various artists, and featuring Mozart's “Lacrimosa/Requiem K626.”

The team of composers deliver a total of 95 music tracks, with a running time of 2 hour and 45 minutes. The Best Track Collection is included in the "Biohazard Sound Chronicle III compilation," published on seven compact discs through Capcom's Suleputer label.


Resident Evil Revelations 2 is available for Windows, PlayStation 4 and PSVita, Xbox One, and Nintendo Switch. The digital soundtrack is streaming on Spotify and Amazon Music Unlimited. From the product page:

Moira Burton, is attending her welcome party for Terra Save when unknown armed forces storm the office. Claire and Moira are knocked unconscious and awaken later to find themselves in a dark and abandoned detention facility.

Working together, they must find out who took them and to what sinister end. Will Claire and Moira make it out alive and discover what’s led to them being taken to this remote island? A story of twists and turns will have players guessing the next step at every turn.