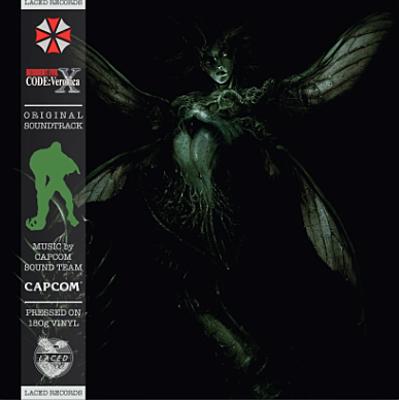 Produced by game designer Shinji Mikami, Code: Veronica X takes place during the events of Resident Evil 3 and follows protagonist Claire Redfield following her escape from Raccoon City. Again searching for her brother Chris, Claire raids Umbrella Corporation's lab in Paris and is imprisoned in Rockfort Island amidst another outbreak of the T-virus.

The remastered vinyl soundtrack ships from publisher Laced Records, as well as distributors Light in the Attic in Seattle, and PixelCrib in Melbourne. The album is decorated with cover artwork by Boris Moncel, and contains 46 music tracks from the 2001 horror game, composed by Takeshi Miura, Hijiri Anze and Sanae Kasahara.

The digital edition of Resident Evil Code: Veronica X is available for PlayStation 4 and Xbox One. From the product page:

Raccoon City was just the beginning. Claire and Chris Redfield’s nightmare continues as the siblings fight to survive against zombies and other monstrosities within Umbrella’s deadly facilities. Scavenge for weapons and precious ammo to battle undead canines, a gigantic subterranean worm, and other terrors lurking in the shadows. Explore the mysterious Rockfort Island facility and the freezing Antarctic Base for clues exposing the Umbrella Corporation’s sordid goals and the truth behind the mysterious and unsettling Ashford twins.