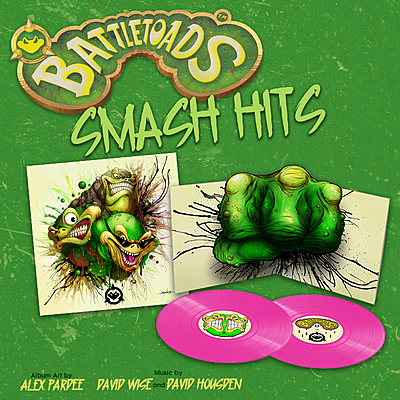 Publisher iam8bit has pressed the "Battletoads: Smash Hits" soundtrack compilation to pink vinyl. Orders are also open through iam8bit and iam8bit Asia, along with distributors Black Screen Records in Germany, PixelCrib in Australia, and through the Rare Store in the UK.

The two-disc analog records set contains the 1991 NES soundtrack to developer Rare's Battletoads by Donkey Kong Country series composer David Wise, along with the 2020 reboot's soundtrack by David Housden. The latter is developed by Dlala Studios and published by Xbox Game Studios for Xbox One and Windows.

Cover art for the album is by Alex Pardee. The digital soundtrack for Battletoads (2020) is streaming on Spotify and Amazon Music Unlimited.

Battletoads: Smash Hits is a 2xLP retro recharge split between two toadally rad discs. First is a trip through an NES time warp, featuring legendary tunes by David Wise (Donkey Kong Country, Diddy Kong Racing) — the OG soundtrack that sent the ’Toads on their epic collision course. Turning the dial from 1991 to 2020, we’re introduced to the metal-drenched score of David Housden (Thomas Was Alone), a fitting modern melody of mayhem for Rash, Zitz and Pimple to bust jaws to. Before Professor T. Bird ends this transmission, we must warn you: This vinyl fights back. The limited edition jacket design by acclaimed artist Alex Pardee includes an exclusive punch "Kiss My Fist" 3D Pop-Up Gatefold

Have you seen @iam8bit's toadally rad Battletoads Smash Hits 2xLP vinyl? It's got one disc full of old-school stuff, one platter of new tunes from @dlalastudios' take on the 'Toads and a gatefold that'll threaten to chin you everytime you open it!