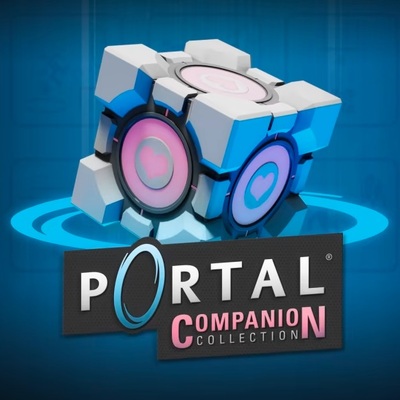 In Portal Companion Collection, protagonist Chell is equipped with Aperture Science's Handheld Portal Device, dubbed the "portal gun," capable of creating entrance and exit gateways on walls that objects can travel between. Chell is monitored in a laboratory setting by an artificial intelligence called GLaDOS, voiced by actor Ellen McLain.

Publisher Mondo's Portal vinyl soundtrack LP featured the original score by Mike Morasky, along with two renditions of end theme "Still Alive" by Jonathan Coulton. The digital edition of Portal is available for Windows, Mac and Linux through Steam, including a free download of the digital soundtrack.

In Portal, you’ll use a highly experimental portal device to solve physical puzzles and challenges. Maneuver objects--and yourself--through space to puzzle your way through the mysterious Aperture Science Laboratories.

Return to Aperture Laboratories in Portal 2 where you’ll once again face off with the lethally inventive, power-mad A.I. named GLaDOS. Meet an expanded cast of characters as you think your way through dangerous, never-before-seen areas of the laboratories and a wider variety of portal puzzles. Plus Portal 2 also includes a co-operative game mode with local, split-screen and online multiplayer so you and a friend can think with portals.

The classic first-person puzzle games Portal and Portal 2 by @valvesoftware are available now on #NintendoSwitch in the Portal: Companion Collection!