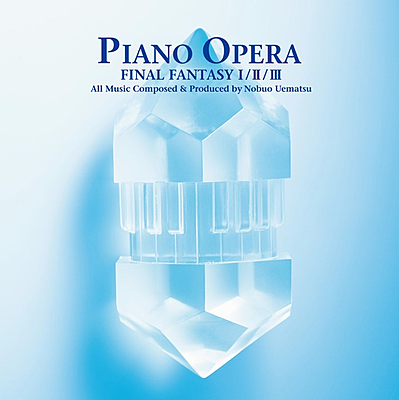 First published to compact disc in February 2012 in Japan, "Piano Opera Final Fantasy I/II/III" is available for shipping domestically through CDJapan. The digital edition is streaming online through the Apple Music service in Japan.

The thirteen-track album features music from Square Enix's Famicom role-playing game trilogy, performed on piano by Hiroyuki Nakayama. Arranged pieces include "Matoya's Theme" and "Mount Gulug" from Final Fantasy, written in 1987 and first heard in Western regions upon the release of Nintendo's English-language localization in 1990.

"Rebel Army" and "Tower of the Magi" from Final Fantasy II date back to the Famicom release in 1988. The themes first appeared in an English-language translation for the Sony PlayStation enhanced port in 2002, arranged by Tsuyoshi Sekito. "Crystal Cave" and "Eternal Wind" from Final Fantasy III emerged in 1990 in Japan. Their first appearance in a Western release came in 2006 on the Nintendo DS, arranged by Sekito, Keiji Kawamori and Yasuhiro Yamanaka.

Also included in the Piano Opera album are a town medley and battle medley, incorporating themes from all three role-playing games. Excerpts from the album, composed and produced by Nobuo Uematsu, are streaming on YouTube, courtesy of the publisher.