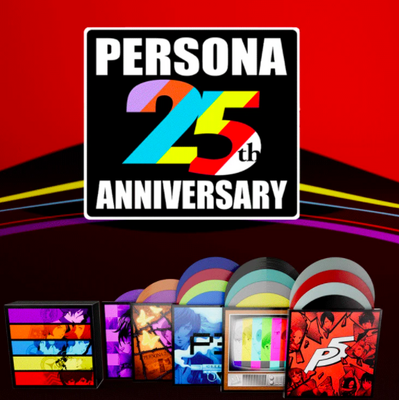 Packaging for the box set is decorated with album art by Drew Wise and includes a sticker sheet and postcard for each game title.

The Persona series is absolutely legendary, rife with a uniquely enveloping world and iconic characters, and the real treasure of the compendium is each game’s soundtrack. Rarely does a franchise embrace music with such care, and it’s because the Atlus Sound Team knows just how helpful good tunes can be to immersing you in the fantasy.

To celebrate the 25th Anniversary of Persona, iam8bit and Atlus have collaborated to honor the beloved series’ sounds with a deluxe box set like no other — a monumental 15-disc collection dating all the way back to the OG game from 1996. Every track has been freshly and painstakingly remastered just for this vinyl release, breathing new life into all of your familiar favorites. With a whopping 8.5 hours of music, this is truly a journey through genre and time, ranging from Persona 1’s memorable dungeon themes and Persona 2’s head-bopping beats to Persona 3’s unique hip-hop stylings and Persona 4’s familiar retro-pop, crescendoing with Persona 5’s famous acid jazz.

Each game’s vinyl discs are housed in their own box, complete with thematic sticker sheets that allow you to personalize your set (Persona is all about personal identity after all), with each box sliding comfortably into an exclusive 25th anniversary slipcase. This is the most epic iam8bit vinyl release to date — which gives especially poignant punctuation to this seminal moment for one of the most enduring video game series ever.