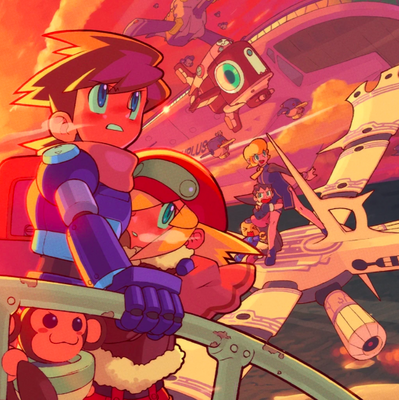 The 3D polygonal adventure game, starring protagonist Mega Man Volnutt, launched in 2000 for the Sony PlayStation console and was later ported to the PlayStation Portable console and Windows operating systems. Capcom's record label Suleputer published selections from the soundtrack for "Rockman Dash 2" during the Tokyo Game Show in October of 2009, available as a limited edition compact disc, packaged with an art book.

Preorders for the double vinyl and cassette tape soundtracks, featuring music composed by Makoto Tomozawa, are open at Ship to Shore in New York, as well as distributors Light in the Attic in Seattle, Black Screen Records in Germany, and disk union in Japan. Orders are scheduled to ship in Q1 of 2022. Art for the album is by mushbuh.

Ship to Shore's Mega Man Legends vinyl soundtrack ships from distributors Light in the Attic in Seattle, PixelCrib in Australia and HighScore Records in France.

Pressed on DASH-ing blue vinyl, this is the FIRST official release of this legendary soundtrack in physical format!

Music from Castlevania Kuro (Black) box due out December 15

Music from Castlevania Aka (Red) box due out December 15