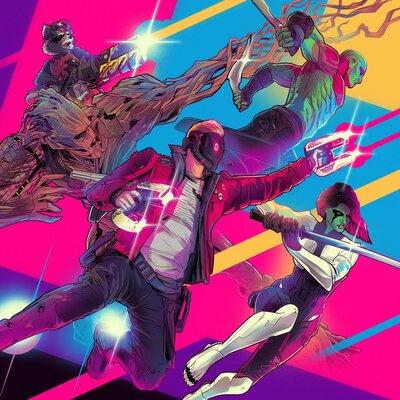 Record label Mondo of Austin, Texas has opened preorders for the Marvel's Guardians of the Galaxy double vinyl soundtrack. The vinyl soundtrack also ships from distributor Light in the Attic in Seattle.

Featuring original illustrations by César Moreno, the analog record release is estimated to ship from the publisher in December. Disc one of the two-disc, 180-gram vinyl set centers on the '80s underground heavy metal act Star-Lord Band, co-composed by Steve Sczepkowski and Yohann Boudreault. Disc two selects music tracks from the score by composer Richard Jacques.

Marvel's Guardians of the Galaxy is available for Nintendo Switch, PS4 and PlayStation 5, Xbox One and Series X|S, and Windows operating systems. The game score and Star-Lord Band concept album are streaming on Apple Music, Spotify, and Amazon Music Unlimited.

The latest from Marvel, Eidos-Montréal and Square Enix (the creators of 2020's Marvel's Avengers) Marvel's Guardians of the Galaxy puts you in control of the universe's least likely heroes. As fans have come to expect, the world of Star-Lord, Gamora, Drax, Rocket Raccoon, and Groot is full of incredible music and this game is no different - this official vinyl soundtrack release features two discs of original music written for the game.

Light in the Attic - Marvel's Guardians of the Galaxy Vinyl Soundtrack

I had the pleasure of welcoming @soundonsoundmag
to my studio in London to discuss my creative process, technology and recording @AbbeyRoad for the score to @GOTGTheGame #wegotthis #playgotg #marvel #GuardiansoftheGalaxygame https://t.co/ftQwJgtUDN