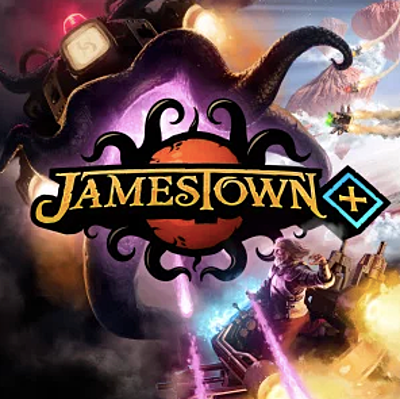 Developer Final Form’s Jamestown: Legend of the Lost Colony depicts an alternative timeline for human history, wherein the advent of powerful steampunk technology emerging in the 17th century propels Spanish and British colonies to war over contested territory on Mars.

The Colony of Virginia of the American Revolution is transmuted through the power of imagination into the red, rocky terrains of a Marisan Lost Colony of Roanoke. Throughout the sprite-based multiplayer shoot-em-up, the devs allude to historical events, casually analogizing their outlandish mythos with documented historical occurrences.

In Jamestown+, the enhanced port for PC, PlayStation 4 and Nintendo Switch, a spacefaring incarnation of English explorer Walter Raleigh grapples with the Conquistador, a Spanish officer wielding an alien artifact capable of poisoning the red planet’s wildlife. While the introductory level pits the humans against Martian antagonists, the narrative soon pivots to Raleigh’s fights against the Conquistador’s enchanted battalions.

The music score for Jamestown by Chilean composer Francisco Cerda is available for purchase through Steam and via Final Form’s Bandcamp page. Excerpts are streaming on SoundCloud. From the product page:

The betentacled warriors of Mars have allied with the powerful Spanish Conquistador, and all of England’s hopes in the New World rest on the shoulders of one disgraced knight: Sir Walter Raleigh. Lush pixelart and an award-winning orchestral soundtrack immerse you in Raleigh’s battle to protect Britain’s last bastion: Jamestown colony.

Samorost 2 soundtrack sets forth for streaming on Spotify