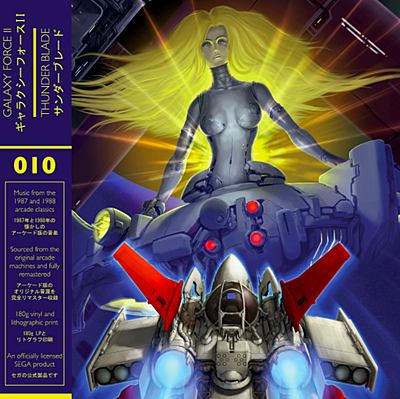 Music for the vinyl soundtrack, available for shipping through Data Discs, is composed by Koichi Namiki, Katsuhiro Hayashi and Tohru Nakabayashi. The Galaxy Force II soundtrack is supplemented by an arrangement of "Beyond the Galaxy," produced by OutRun composer Hiroshi “Hiro” Kawaguchi, while the Thunder Blade score includes three unused tracks.


From the Steam page:

The peaceful and prosperous solar system Junos was located at the end of the Milky Way. Those who called its five planets home had no idea what was about to happen... Halcyon, ruler of the Fourth Empire, had Junos marked as its final target in the galactic massacre, and had sent the bulk of his attacking force in with a single purpose – the elimination of all life forms in the system, and the construction of a gigantic fortress on each of the five planets from which to rule the galaxy. The galaxy’s recognised governing body, the Space Federation, began recruiting attack pilots in an effort to reclaim Junos. Strap yourself into your TRX-5 Quasar and turn the tables on Halcyon.