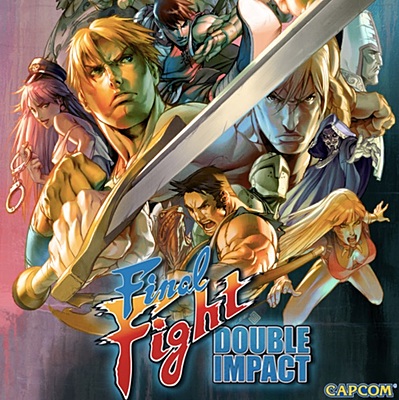 Capcom has yet to remove a zip file from the old-timey Final Fight: Double Impact website, posted circa 2010, allowing the arranged soundtrack to be downloaded in mp3 file format. Music for Final Fight is arranged by Simon Viklund, while Magic Sword is arranged by Trond-Viggo Melssen and Erik Thunberg. Original compositions are by Capcom composers Yoshihiro Sakaguchi, Yoko Shimomura, Yasuaki Fujita, and Manami Matsumae.

Final Fight: Double Impact became backward compatible with the Xbox One console in May of 2016. Magic Sword will join the Capcom Arcade 2nd Stadium lineup on July 22nd for PlayStation 4, Xbox One, Nintendo Switch and Steam. Final Fight is a featured title in the Capcom Beat 'Em Up Bundle compilation and is part of the Arcade Revolution (1989–1992) pack for Capcom Arcade Stadium for the afforementioned gaming platforms.

In Final Fight, the Mad Gear street gang has kidnapped Mayor Mike Haggar’s daughter, Jessica. Refusing to give into their demands, Haggar - a former pro wrestler - sets out to rescue Jessica with the help of her boyfriend, a martial artist named Cody, and his friend, a modern-day ninja named Guy. Together, take back Metro City, one smashed face at a time.

In Magic Sword, you are the Brave One, a warrior on a quest to defeat the demon Drokmar, who has cast the world to a lightless hell. Battle through the Dragon’s Tower as you hone your skills with sword and magic and conquer the minions of evil. Rescue 8 heroic allies to aid you, but beware of chimera, bears, dragons, trolls and monsters…all in the wait, hungry for blood.

Persona 3 Portable in development for Xbox One & PlayStation 4