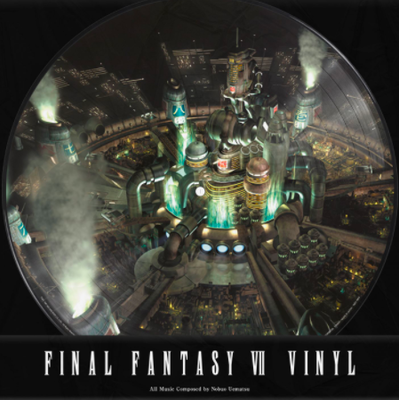 The Final Fantasy VII double vinyl soundtrack is available for shipping domestically through the Square Enix store for North America, currently available for 25% off.

The picture disc analog record set features 29 music tracks by series composer Nobuo Uematsu from the influential 1997 role-playing game, recently ported to contemporary consoles, including the Nintendo Switch, PlayStation 4 and Xbox One. The digital soundtrack is available for streaming on the Spotify and Apple Music platforms.

In Midgar, a city controlled by the mega-conglomerate Shinra Inc., the No. 1 Mako Reactor has been blown up by a rebel group, Avalanche. Avalanche was secretly formed to wage a rebellion against Shinra Inc., an organization which is absorbing Mako energy, destroying the natural resources of the planet. Cloud, a former member of Shinra's elite combat force, Soldier, was involved with the bombing of the Mako Reactor.