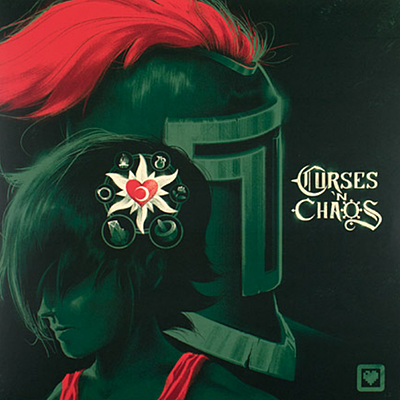 The Curses N Chaos vinyl soundtrack, composed by Patrice Bourgeault of Panzer Paladin, is available for shipping from The Yetee. The limited edition black and red disc release also ships from distributor Light in the Attic in Seattle.

The sprite-based 2-player cooperative brawler is by independent developer Tribute Games. Curses N Chaos is available for Windows and Mac operating systems through Steam, and PlayStation 4 and PS Vita consoles.

Cover art for the analog records release is by Ian Wilding. The 19-track chiptune soundtrack is available for purchase on the composer's Bandcamp page and streaming on Spotify, with excerpts on The Yetee SoundCloud channel.

The Wizard King has cursed Lea and Leo, the fiercest fighters in the land! Now living under the shadow of death, they're hounded by ghouls and hunted by the grim reaper itself! To lift the curse, you must concoct the legendary Elixir of Life! But there's only one way to get the ingredients... FIGHT MONSTERS! But punching and kicking is not all you can do! Assisted by Allison the Alchemist, you can craft potions and summons to heal, create weapons and even marshal elemental powers at your command...