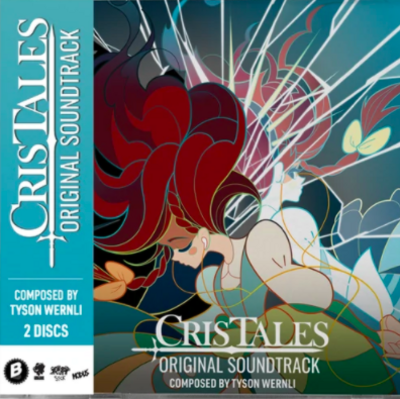 Published by Modus Games and developed by Colombian developers at SYCK and Dreams Uncorporated, turn-based role-playing game Cris Tales is distinguished by its angular, stylized visuals and a soundtrack inspired by classic Japanese role-playing games.

Orphaned protagonist Crisbell embarks on a journey across the land of Crystallis. On her way she recruits a team of allies, united in their efforts to thwart a cataclysm that threatens to tear apart the four kingdoms of the region. Through the use to Crisbell’s unique Time Magic, the player's choices dynamically impact the future of Crystallis.


Black Screen Records, based in Cologne, Germany, has published the Cris Tales soundtrack, composed by Tyson Wernli. The double vinyl publication, available through distributor Light in the Attic in Seattle, ships on 140-gram vinyl, presented in a gatefold sleeve. Each purchase also includes a Bandcamp download of the 70-track digital soundtrack.

Cris Tales is available for Windows through Steam, along with PS4 and PlayStation 5, Xbox One and Series X/S, and Nintendo Switch consoles. The digital soundtrack is streaming on Spotify and can be purchased through Steam and Bandcamp.

Experience Past, Present, and Future simultaneously in this gorgeous, indie love letter to classic JRPGs. Discover a unique combination of branching stories, innovative combat, and classic RPG gameplay in Cris Tales’ exciting and unforgettable exploration of how our actions echo through time. Join the newly awakened Time Mage, Crisbell, and her fantastical companions in a fantasy world facing a grim future. The powerful Time Empress and her forces threaten to bring about a cataclysm tearing apart Crystallis and the other four Kingdoms of the region.