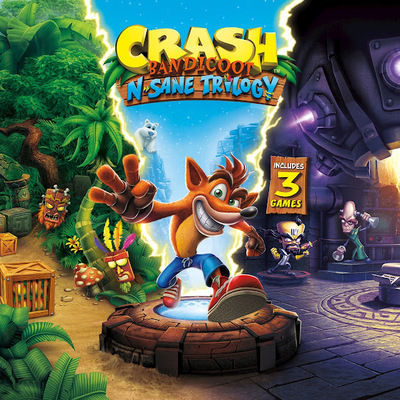 Developer Naughty Dog's platforming trilogy—composed of Crash Bandicoot, Crash Bandicoot 2: Cortex Strikes Back, and Crash Bandicoot 3: Warped—has been treated to new visuals and arranged audio for current generation consoles. Players can select to play as either Crash or his baby sister Coco, each equipped with their own syle of N-Sane Attacks.

The 47-track digital soundtrack album by Vicarious Visions Audio can be streamed online via Amazon Music Unlimited, Spotify and YouTube Music. For nostalgic listeners looking to dive deeper into the series' audio history, dozens of music tracks from the original scores by Josh Mancell are streaming on the composer's SoundCloud channel.

Crash Bandicoot N. Sane Trilogy is available for Windows via Steam, along with PlayStation 4, Xbox One and Nintendo Switch consoles.

Re-join your favorite marsupial, Crash Bandicoot, as he spins his way onto PlayStation 4 along with his three most memorable adventures, newly recreated for the current generation.

Including Crash Bandicoot, Crash Bandicoot 2: Cortex Strikes Back, and Crash Bandicoot 3: Warped, the N. Sane Trilogy has been lovingly built from the ground-up with brand new visuals and audio to deliver the series’ classic gameplay to a whole new generation.

Today is a SoundCloud Fan Powered Friday⚡️ aka: a great day to listen to a ton of #CrashBandicoot tunes ⚡️ #SoundCloud https://t.co/QRSQkmaLKt

No Man's Sky lands on Nintendo Switch in October