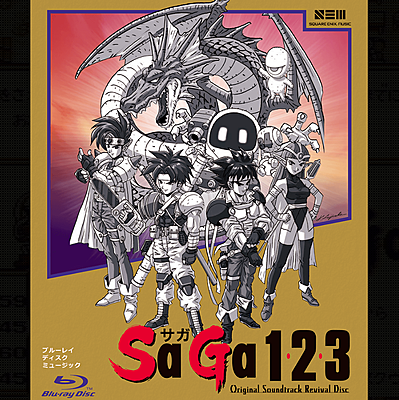 The disc archives the original soundtracks from the Collection of SaGa trilogy, designed for Game Boy by Akitoshi Kawazu. 1989's Makai Toushi SaGa capitalized on the popularity of the Final Fantasy franchise when the RPG was localized for English-language regions the following year as Final Fantasy Legend, featuring a music score by Nobuo Uematsu.

The Music Blu-ray includes 54 original music tracks and one arranged medley, titled "Journey's End." The medley ties together the themes "Prologue," "Town," "Main, "Holding Back Tears" and "Epilogue." Music from the series is available for streaming through the Apple Music and Spotify services.

Update: (8.28.21) Collection of SaGa, featuring all three titles in the Final Fantasy Legend series, is available for the Nintendo Switch, due out on iOS and Android on September 22, and coming to Steam on October 21.

Experience the origins of the SaGa series with the COLLECTION OF SaGa FINAL FANTASY LEGEND, the first complete port of these hugely popular titles. The collection includes new enhancements like high-speed mode as well as features unique to the Nintendo Switch, such as adjustable screen magnification and game screen background customization. Featuring compatibility with, of course, handheld mode, but also with TV mode and tabletop mode. Furthermore, this game also revives the nostalgia of playing the original by enabling vertical usage of the console after removing the Joy-Cons.