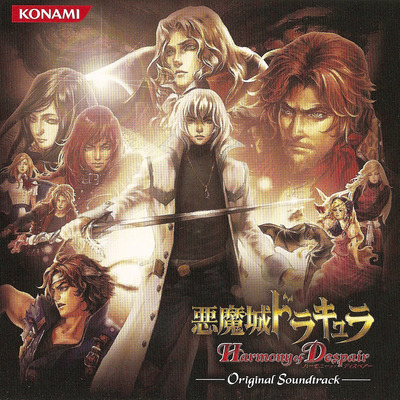 Multiplayer online title Castlevania: Harmony of Despair (HD) debuted in August of 2010 on Xbox Live Arcade. The soundtrack album was first published to compact disc by Konami Digital Entertainment in January of 2011, followed by the PlayStation Network port.

Arrangements from previous Castlevania titles include composer Michiru Yamane's "Castle Corridor" from Aria of Sorrow, "After Confession" and " Dark Night" by Masahiko Kimura from Dawn of Sorrow, asl well as Yamane's "Hail from the Past," "Gaze Up at the Darkness," "Piercing Silence" and "Esquisse of Violence" from Portrait of Ruin.

The 39-track soundtrack is included in the "Music for Castlevania" Aka (Red) 13-CD box set, available for shipping domestically through CDJapan.