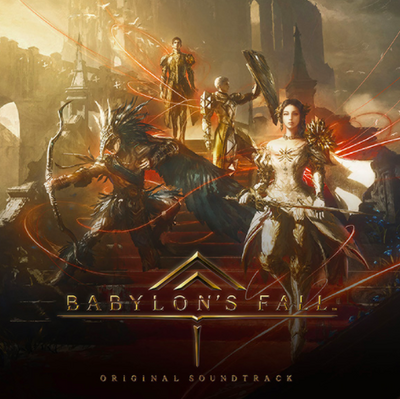 PlatinumGames-developed action role-playing game Babylon's Fall is due out on March 3rd, 2022 for PlayStation 4, PlayStation 5, and Windows via Steam. Lead composer Hiroshi Yamaguchi previously contributed to the soundtracks for Okami and Bayonetta.

Babylon's Fall is a collaborative RPG, allowing players to team up with up to three fellow Sentinels in an effort to to reclaim the Tower of Babel. The player takes on the role of a once conscripted prisoner, empowered by a parasitic device called the “Gideon Coffin.”

Slated for release on March 9th, 2022 on five compact discs, the soundtrack album is currently available for preorder through the Square Enix store for North America and Europe, along with distributors CDJapan and Play-Asia. Blog post "The Appeal of Babylon's Fall Music (1/2)" outlines instruments chosen for the soundtrack's recording sessions.

Music for Babylon's Fall is by Yamaguchi, Seiji Hotta, Hyun Kim, Aoba Nakanishi, and Hitomi Kurokawa. Excerpts from the soundtrack are streaming on the official album website.

Experience acclaimed developer PlatinumGames' signature combat in BABYLON’S FALL with up to 3 other players or take on the Tower of Babel alone, in this new cooperative action RPG.

After the Babylonians perished, only their great tower “The Ziggurat” remained. Now a new empire has come to pillage its ruins and uncover its fabled treasures. Join forces with other Sentinels, unwilling subjects forcibly implanted with Gideon Coffin, relics that grant the few survivors unrivalled powers.

Every Wednesday until launch, we want to share some of the incredible music made for #BabylonsFall! 🎵

You'll grow familiar with this peaceful track as you walk around the Sentinel Headquarters.