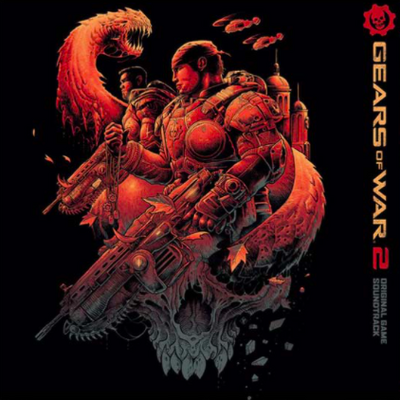 Published by Microsoft Game Studios for the Xbox 360 console in 2008, Gears 2 continues the sci-fi combat series' emphasis on using tactical cover to avoid enemy fire. The live and electronic instrument layers recorded for the score by composer Steve Jablonsky build on the foundation established by musician Kevin Riepl’s prior entry. The full digital soundtrack is available for streaming on Spotify and Amazon Music Unlimited.

Published in anticipation of the 15th anniversary of Gears of War, the double vinyl album is specially remastered for vinyl by Joe Caithness, with artwork contributed by illustrator Luke Preece. The item is estimated to ship from the publisher in March of 2022. Preorders are also open at Black Screen Records in Germany, Light in the Attic in Seattle, HighScore Records in France, and PixelCrib in Australia.

2008’s Gears of War 2 sealed the franchise’s position as a multiplayer juggernaut with 5v5 and Horde mode, and heightened the sense of spectacle with its epic campaign. Composer Steve Jablonsky (Transformers film series) built on Kevin Riepl’s musical foundations by introducing more live and electronic instrumental and vocal layers to make things bigger, darker, and crunchier.

Light in the Attic - Gears of War 2 (Original Soundtrack)