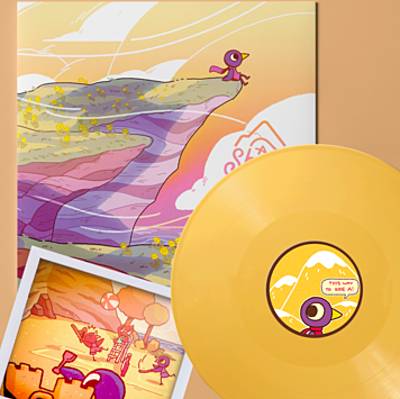 Stumpy Frog Records has reprinted the vinyl soundtrack for A Short Hike, featuring music composed by Mark Sparling. The second pressing on Meteor Lake Blue vinyl is limited to 500 copies.

The adaptive soundtrack from A Short Hike, which shifts according to in-game weather conditions, is complemented on the digital album by several Game Boy arrangements. The digital album can be purchased on Bandcamp and is streaming on YouTube Music.

A Short Hike is available for Nintendo Switch, PlayStation 4 and for Windows, Mac and Linux operating systems through Steam, developed by Canadian programmer Adam Robinson-Yu. The analog record is available through distributor Kitty on Fire in North America. Art design for the album is by Saffron Aurora.

A story doesn’t have to be epic to be life-changing. Adam Robinson-Yu’s wonderful Independent Games Festival award winning indie hit has you join Claire as she hikes, climbs, and soars through the peaceful mountainside landscapes of Hawk Peak provincial park during a holiday trip with her Aunt. Mark Sparling soundtracks her adventure with uplifting, melancholic, and serene tunes, while Saffron Aurora’s art design adorns this release of ‘A Short Hike’.

Stumpy Frog Records - (OUT OF STOCK)

Sparling’s latest release is one with the makings of another slow-rolled indie hit. https://t.co/o8l08Mc78r