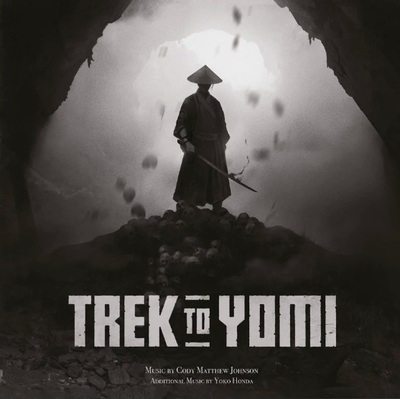 Trek to Yomi is the story of a swordsman named Hiroki who embarks on a spiritual quest to restore balance to his psyche after his village is ransacked and burned by marauding bandits. Hiroki, portrayed by voice actor Masayuki Katô, voyages into the Shinto underworld, where he is plagued by nightmarish visions and tormented by his irreconcilable pursuits of ‘Love’, ‘Duty’, and ‘Fury.’

Yomi's music score by composer and music producer Cody Matthew Johnson, in collaboration with composer and music director Yoko Honda, utilizes traditional instrumentation to help set the tone of the historical drama. We spoke with the music director to learn more about the making of the sidescrolling action game, set during the Edo period in Japan.

Published by Devolver Digital, Yomi is presented in black and white, with Japanese-language dialog subtitled in multiple languages. Screenshots of the game will look uncannily familiar to enthusiasts of Akira Kurosawa's samurai films of the 1950s, set in the feudal society of Japan's Edo period. These striking thematic choices by game director Leonard Menchiari of developer Flying Wild Hog make the game feel like a playable slice of vintage Japanese cinema.

Hiroki's battles with the bandits in Trek to Yomi showcase the capacity of traditional Japanese instruments in dramatizing suspenseful and dangerous situations. Yoko Honda explains, "[T]aiko, for example, has intense low frequency and plays perfect battle music with Japanese traditional rhythmic patterns a lot of times, and Shamisen is like slap bass that has strong and edgy articulations that could be played on a wide range of scales as well, which really suits the 'suspense and danger'."


The Trek to Yomi music team was presented with an opportunity to underscore the visceral sense of dread of the protagonist's nightmares through the use of period-specific instruments. Honda explains, "We chose to utilize the 'Tsugaru shamisen' method and musicality a lot on Trek To Yomi’s score to create intense speed, tension, and occasionally terrifying, spooky feelings of fighting against the dead."

In scoring music for the underworld as Hiroki's sense of balance comes unfurled, some musicians might be tempted to abandon the use of period music and introduce contemporary instruments more familiar to modern gamers. Who is to say that an electric guitar or Korg synthesizer would be out of place in a phantasmagoric realm stalked by levitating priestesses and knife-wielding skeletons?

Nevertheless, the sound team opted to embrace a historical approach to the soundtrack, even during the most disorienting nightmare sequences. Honda points out, "Gagaku (a style of old Japanese court music) elements are heavily used on this soundtrack, especially when the hero Hiroki explores the underworld."

Flying Wild Hog consulted historian Aki Tabei Matsunaga in researching historical elements, informing dialogue and the mise en scène of Hiroki's imperiled hometown. "Aki’s broad and impressive knowledge helped the Hog team to craft such stunning visuals," Honda recalls. "[W]hen I saw the first draft version of this game’s design with beautiful Feudal Japan in Edo period, I could sense what kind of instruments or traditional scales that I had to choose from based on the villagers’ appearance, size of the village, and portrait of ‘how they live’."

"Aki’s input definitely played a significant role on the sound side as well," Honda adds. "Coincidentally, my writing partner Cody Matthew Johnson had some great ideas at the beginning of our production - actually, at the pre-production - to utilize some of the 1950’s recording methods and to recreate a kind of ‘grittiness’ of 1950’s cinematic soundtracks including Kurosawa’s movies."

In the genre of Westerns, "The Magnificent Seven" by John Sturges repurposed the script of Kurosawa's "Seven Samurai" into a showdown between gunslingers and Mexican bandits. Kurosawa's "Yojimbo" stars legendary actor Toshiro Mifune as a forgotten, wandering ronin; while Sergio Leone's adaptation, titled "A Fistful of Dollars," introduced audiences to Clint Eastwood in his first leading role, as "the Man With no Name."

One memorable convention of Kurosawa's filmmaking style that informed the Trek to Yomi soundtrack was the allocation of music themes to each of the key characters.

"[W]e used Hayasaka’s 'theme writing' method on the main characters," Honda explains. "A good example of this can be heard in the legendary film 'Seven Samurai.' Hayasaka composed five motifs using different genres of music and/or instruments for each one of five main characters, and so did we; we created Trek To Yomi’s three main characters themes purposely adopting very different scales, styles, and instruments of Japanese traditional music to illustrate each main character and their upbringing sonically. "

Kurosawa's masterful camerawork and editing made for unforgettable action sequences, and Honda invites players who enjoyed the game to view "Seven Samurai" while the imagery and sound of Yomi are still fresh in their memories. Her Spotify playlist "Trek to Yomi Inspirations" selects several compositions by Hayasaka that help illustrate his approach to composing character motifs. She suggests, "If you could spare some time to watch the movie or even just the excerpts of the movie for each theme, you will better understand the 'theme method' that I’ve mentioned and you will better understand how we scored Trek To Yomi."


The conflict plaguing Hiroki's soul, forcing him to choose between the pursuits of ‘Love’, ‘Duty’, and ‘Fury,’ is dramatized through gaming's unique capacity for presenting the player with branching paths. The protagonist can choose only a single pursuit among the three outlined above, triggering one among multiple endings. "As to the restoration passages," Honda explains, "there are sequences that emphasize the progress. How they’re dramatized is depending on the 'path' that you choose (there are three paths that you could choose from towards the end) and it varies."

This article has been reprinted from this source: playsounds.co.uk