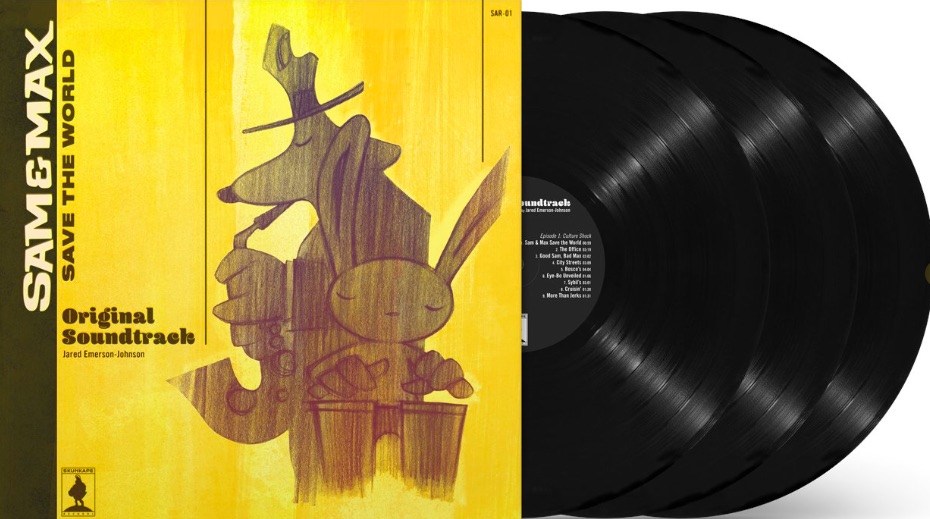 The Sam & Max Save The World vinyl soundtrack is now on sale at the Skunkape Games store. Three-disc vinyl collectors edition is decorated with cover art by Steve Purcell and designer Jay Shaw.

Telltale published the first of six episodes Sam & Max Save The World for Windows in October of 2006, based on the "Sam & Max" comic book series by Purcell. More recently, early Telltale designers now heading Skunkape Games brought the remastered edition of the episodic title to Nintendo Switch, Xbox One and Windows through Steam.

Sam & Max Save The World arrived on PlayStation consoles on September 29th, alongside Sam & Max Beyond Time and Space. The digital soundtrack by Jared Emerson-Johnson is available for purchase through Bandcamp, GOG and Steam. Engineering is by Jory Prum of studio.jory and Bill Storkson at AudioSFX.

It's just another day at the office for the self-proclaimed Freelance Police when the Commissioner calls in with a disturbing report: former child stars are running amok in the street! What starts as an open-and-shut case of idiotic vandalism balloons into an all-out conspiracy as Sam and Max encounter one miscreant after another who have been mysteriously hypnotized. (You can tell from the "spinny thing" they do with their eyes.)

Who's the source of this malfeasance, and what is their dastardly plan? Cracking this case will require Sam's nose for detective work, Max's lack of conscience, an assortment of inventory items, and a little help from neighbors Sybil Pandemik, Bosco, and Jimmy Two-Teeth. From Sam & Max's street to the White House lawn, inside the internet, and all the way to the moon, this baffling mystery gets weirder and funnier as it unfolds.

And don't forget, you can buy the vinyl Sam & Max Save the World soundtrack from https://t.co/UZYZreBBCV! Get your holiday shopping done early! pic.twitter.com/LyqcictS1w