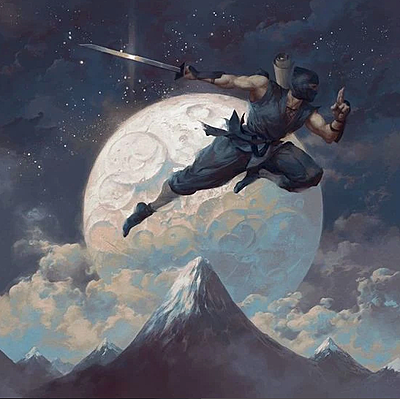 Publisher iam8bit pressed a two-disc vinyl soundtrack for The Messenger by composer Rainbowdragoneyes back in 2019, with vinyl album art by "Magic: The Gathering" illustrator Peter Mohrbacher. The three-part digital soundtrack album on Bandcamp includes music from "The Past," "The Future," and beach party-themed Picnic Panic expansion.

Starring the "Western Hero" granted the power to travel through time, The Messenger flips between 8-bit and 16-bit stylized landscapes, challenging the player to intense 2D sidescrolling platforming and combat. The silent protagonist is aided both by a winged sidekick named Quarble—capable of reviving the hero—and a mysterious Shopkeeper granting upgrades, including a shuriken ranged attack, a downward-swiping wingsuit strike and underwater dash.

The Messenger is also available for Xbox One and PlayStation 4 consoles. Sabotage Studio and Rainbowdragoneyes are currently partnering on the sprite-based role-playing game Sea of Stars, due out in 2023.

As a demon army besieges his village, a young ninja ventures through a cursed world, to deliver a scroll paramount to his clan’s survival. What begins as a classic action platformer soon unravels into an expansive time-traveling adventure full of thrills, surprises, and humor.

iam8bit - The Messenger Vinyl Soundtrack (OUT OF STOCK)

These ninja moves feel great on the #SteamDeck.

Yes, The Messenger is now verified ✅ on @valvesoftware’s handheld device.