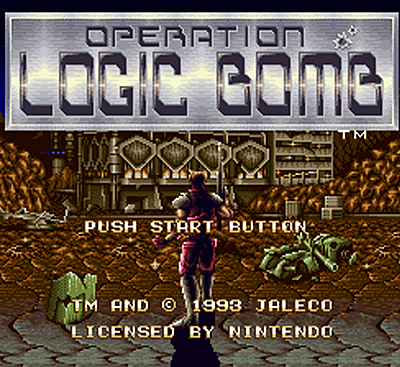 Published in March of 2015 by the Clarice Disc label in Japan, the "SUPER Rom Cassette Disc In JALECO" compilation is available for shipping on four compact discs through CDJapan.

Rival Turf is the first installment in the "Rushing Beat" beat-em-up series, preceding Brawl Brothers and The Peace Keepers, and features music composed by Yasuhiko Takashiba and Atsuyoshi Isemura. The Super E.D.F. score, composed by Tsukasa Tawada and Takashiba, is also available for streaming on Spotify.

Agent Logan, who has been fitted with bioelectronic implants that grant him superior strength, reflexes and analytical abilities, has been charged with a mission to save the Subspace Particle Transfer Project. It’s up to him to infiltrate, neutralize the intruders and rescue the scientists in a top-down shooter with giant bosses and frenzied action that doesn’t let up.