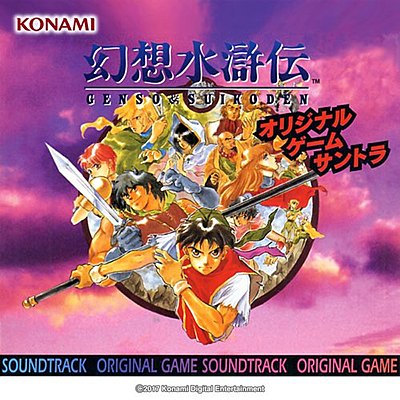 Konami's PlayStation role-playing game Genso Suikoden launched in 1995 in Japan, followed by Sega Saturn, Windows and PlayStation Portable ports. The English-language localization for the turn-based RPG debuted as "Suikoden" in 1996.

The son of imperial general Teo McDohl, Suikoden's unnamed protagonist learns of widespread corruption in the capital city of Gregminster and flees with his father's servant Gremio. Upon securing an abandoned castle, the player can recruit up to 107 characters to join him in preparing for battle at the Liberation Army headquarters.

The 58-track Suikoden soundtrack is streaming on Apple Music and Amazon Music Unlimited. Music for the game is by Miki Higashino, Tappy Iwase, Hiroshi Tamawari, Hirofumi Taniguchi, and Mayuko Kageshita. An excerpt from the 25th Anniversary Symphonic Concert can be viewed on YouTube, courtesy of the Japan Game Music Orchestra (JAGMO).