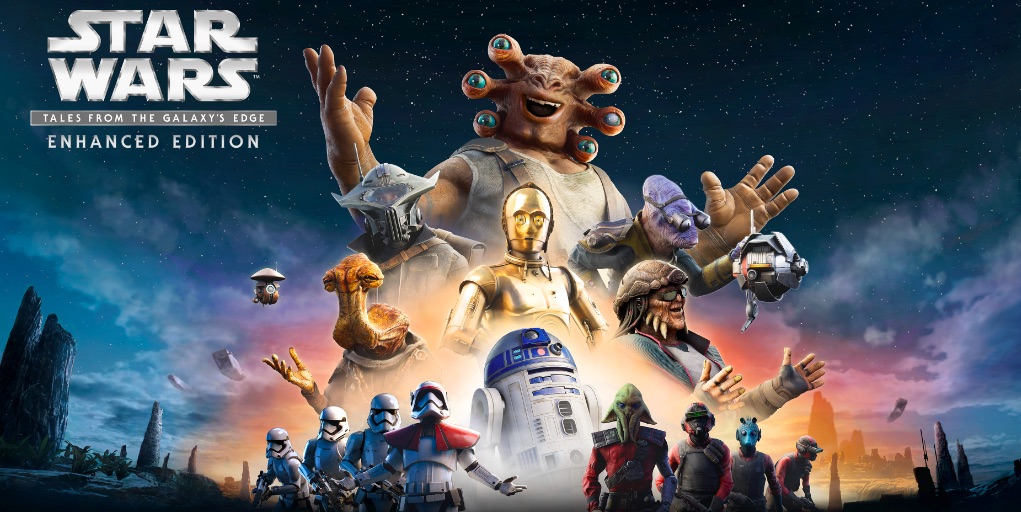 Lucasfilm’s ILMxLAB has announced an enhanced edition of Star Wars: Tales from the Galaxy's Edge is currently in development for PlayStation VR2.

The action-adventure title, originally designed for Oculus Quest, is the product of Lucasfilm’s division of Industrial Light & Magic catering to virtual reality, augmented reality, and theme park attractions. Tales from the Galaxy's Edge is set on the Black Spire Outpost on the planet of Batuu, as depicted in Disneyland attraction Star Wars: Galaxy's Edge.

Quests are apportioned at the Cantina by Azumel bartender Seezelslak, as the player takes on the role of a droid repair technician. Galaxy's Edge is peppered with run-ins with familiar Star Wars characters, from androids R2-D2 and C-3PO, to Jedi Master Yoda, and the porgs from The "Last Jedi."

Published by Walt Disney Records, the Tales from the Galaxy’s Edge digital soundtrack is streaming on Spotify and Amazon Music Unlimited. Music for the game is by Bear McCreary, Danny Piccone and Joseph Trapanese. The enhanced edition, promising rich 3D audio and a high-fidelity visual experience, is planned for release in 2023.

As a Droid Repair Technician who crash lands on Batuu, take on missions in the Batuu wilds, face off against the Guavian Death Gang, infiltrate a First Order facility and travel to other eras in the galaxy, in your own unforgettable Star Wars story.

The adventure continues in the cantina by unlocking three of Seezelslak’s legendary Tales. By completing his special missions, you’ll travel to other eras and even planets in the galaxy: become a Jedi in the “Temple of Darkness”; train with your padawan in “The Sacred Garden”; or even take on a bounty as assassin droid IG-88 in “The Bounty of Boggs Triff”.

Star Wars: Tales from the Galaxy’s Edge - Enhanced Edition lets you become the hero of your own thrilling adventure, allowing you to play your way with different difficulty levels, combat weapons and within immersive tales that show how the actions of one person can change the galaxy.

#StarWarsTales from the Galaxy’s Edge – Enhanced Edition from @ILMxLAB is now available to Pre-Order as a #PSVR2 launch title, launching February 22, 2023. https://t.co/ekZYSvIAAE