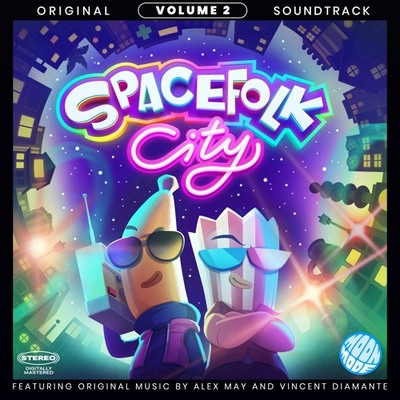 Spacefolk City for Oculus Quest, Oculus Rift and Steam VR challenges the player to build a bustling new city for spacefaring Spacefolk, displaced from their solar system after their local sun goes supernova.

The soundtrack album by Alex May and Vincent Diamante spans 27 music tracks in two parts, mastered by Chris McCormack. Links to the albums on various music platforms can be found on Moon Mode Games' Linktree page.

Spacefolk City is a funky, casual take on the city building genre. Construct a floating city in space, decorate it with a variety of absurd items, and keep your Spacefolk citizens happy.

Each Spacefolk has different abilities that you’ll need to utilize creatively to ensure their survival. Spruce up the place with items matching each of their interests to keep them happy, and maximize their roles around the city to create a delightful little community

🎸It's TIME!! Volume 2 of the Spacefolk City soundtrack has just landed! Now you can finally listen to ALL your favs from @protracker and @vincentdiamante's bonkers OST!