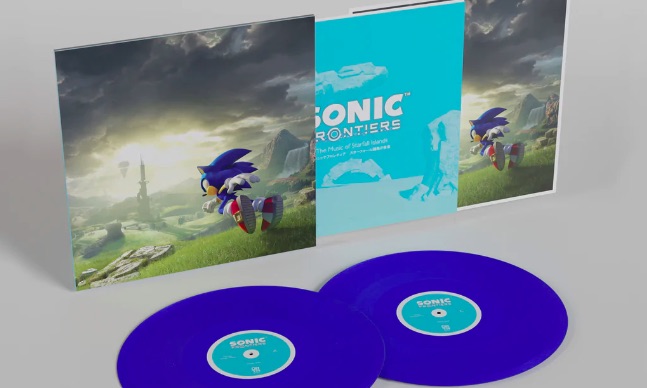 Preorders for the 180-gram double vinyl edition have opened at distributors Light in the Attic in Seattle, Black Screen Records in Europe, and PixelCrib in Melbourne, Australia. Ohtani's "Cyber Space DJ Mix" can be viewed on Sega's Sonic the Hedgehog YouTube channel. "Kronos Island (Sample Track)" and "Theme of Starfall Islands" from the soundtrack are streaming on the publisher's SoundCloud channel.

Shipping in February of 2023, the four-disc vinyl set includes 26 music tracks, comprising every movement and variation of each island's background music. (Not included are the vocal themes, Cyber Space themes, or the song "Vandalize.") The limited edition release ships on frosted clear with green, orange, red and blue splatter.

Sonic Frontiers is scheduled for release on November 8th for Nintendo Switch, PS4 and PlayStation 5, Xbox One and Series X/S consoles, alongside Windows through Steam and the Epic Games Store. The Digital Deluxe Edition includes a 25-track digital soundtrack.

Worlds are colliding in Sonic the Hedgehog’s newest high-speed adventure! In search of the missing Chaos emeralds, Sonic becomes stranded on an ancient island teeming with unusual creatures. Battle hordes of powerful enemies as you explore a breathtaking world of action, adventure, and mystery. Accelerate to new heights and experience the thrill of high-velocity, open-zone platforming freedom as you race across the five massive Starfall Islands. Jump into adventure, wield the power of the Ancients, and fight to stop these new mysterious foes. Welcome to the evolution of Sonic games!

Light in the Attic - Sonic Frontiers: The Music of Starfall Islands - (2xLP)

The wait is over! You can now enjoy Sonic Frontiers' entire soundtrack anytime, anywhere. The album is available on all major digital services!