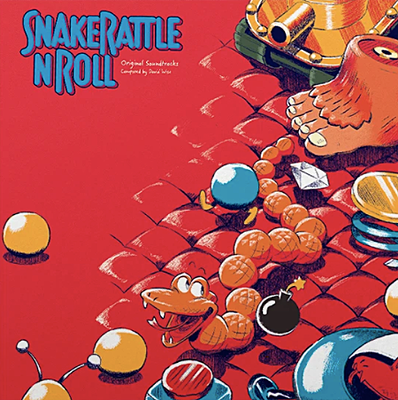 As part of their celebration of the 35th anniversary of developer Rare, Fangamer has pressed the Snake Rattle 'N' Roll vinyl soundtrack album.

Composed by David Wise, the analog record includes background tracks from both the 8-bit Nintendo Entertainment System release and the Sega Mega Drive port of the 1991 platformer. Wise is perhaps best known for his contributions to the Donkey Kong Country and Yooka-Laylee game series. In addition, he is responsible for the music scores for Wizards & Warriors and Tengami.

Snake Rattle 'N' Roll is featured in the Rare Replay compilation for the Xbox One console. The tune "Jaws Shores" is part of the "Rare All-Stars 35th Anniversary Collection" music compilation, streaming on Spotify.

This 33-track collection includes David Wise's soundtracks for both the NES and Mega Drive releases along with brand-new liner notes he's written for the album, all wrapped up in a beautiful gatefold package with original art from Aimee Cairns.