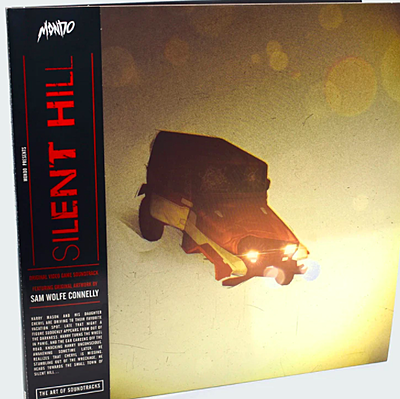 Mondo has pressed the Silent Hill soundtrack to vinyl, featuring music from the PlayStation survival horror game composed by Akira Yamaoka. The analog record is available for shipping from the publisher in Austin, and from distributors PixelCrib in Melbourne and Black Screen Records in Cologne.

In the introduction to the game, protagonist Harry Mason drives his adopted daughter Cheryl to the town of Silent Hill while on vacation. Harry's surroundings are concealed by a veil of fog, when suddenly he is startled when his headlights reveal a child standing in the middle of the road. He swerves, barely avoiding a collision and causing his car to crash. Upon awaking, he discovers that Cheryl has gone missing. He departs to search the fog-covered town.

The influential third-person survival horror game was developed by Team Silent at Konami Computer Entertainment Tokyo in 1999. Artist Takayoshi Sato served as character designer, creating computer-generated models that helped define the visual identity of the haunting cinematic cutscenes. Director Keiichiro Toyama previously worked with Hideo Kojima as a graphic designer on the Sega CD port of Snatcher, and would later go on to direct the Siren trilogy of horror games.

Excerpts from the soundtrack are streaming on PixelCrib's SoundCloud channel. Artwork for the vinyl release is by Sam Wolfe Connelly.