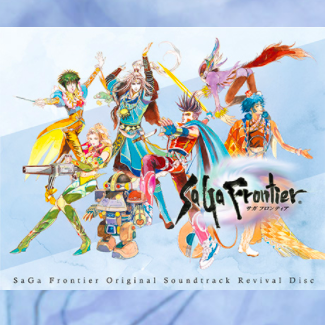 The latest Revival Disc series installment will contain 74 music tracks by composer Kenji Ito from the PlayStation role-playing game, along with seven additional tracks from the SaGa Series 20th Anniversary Premium Box, and three theme's from Fuse's storyline from the SaGa Frontier Remastered release. Cover illustrations are by Tomomi Kobayashi.

Produced and directed by Akitoshi Kawazu, SaGa Frontier debuted in Japan on the Sony PlayStation console in 1997 and received an English-language localization the following year. SaGa Frontier Remastered features enhanced visuals and additional content, available for Nintendo Switch, PlayStation 4, and Windows, along with Andoid and iOS devices. A physical release for Switch and PS4 in Asian regions includes the English-language localization.

The SaGa Frontier digital soundtrack is streaming on Spotify. A trailer for the Blu-ray can be viewed on YouTube, alongside an eight-minute gameplay trailer, courtesy of the publisher.

The beloved 1998 RPG Classic, SaGa Frontier, is reborn with improved graphics, additional features, and a new main character! Experience this role-playing adventure as one of the eight heroes, each with their own storyline and goals. With the Free Scenario system, unfold your own unique journey. Engage in dramatic battles, using the Hirameki system to gain new skills and carry out combined attacks with your allies