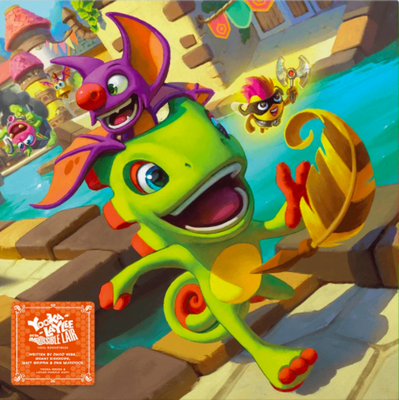 Fangamer in Tucson has published the Yooka-Laylee and the Impossible Lair double vinyl soundtrack album, decorated with illustrations by Renato Giacomini and special sleeve art by Jon Kay. The two-disc analog record set comes with a free code for the Bandcamp digital download of the full soundtrack.

Preorders for the Impossible Lair vinyl soundtrack are open at distributor Black Screen Records of Cologne, Germany. Just as the original Yooka-Laylee by Playtonic Games served as a modern-day homage to 3D platformers Banjo-Kazooie and Banjo-Tooie, the sequel's 2D platforming sequences harken back to the gameplay of the Donkey Kong Country trilogy.

Yooka-Laylee composers David Wise of Battletoads and Grant Kirkhope of Perfect Dark are joined by Matt Griffin and Dan Murdoch on the sequel. The 126-minute collaborative score sports a collection of jaunty, cheerful melodies, available for streaming on Apple Music and Amazon Music Unlimited.

The 56-track digital soundtrack for the retro-styled platformer is available for purchase through Bandcamp and Steam. The original score is complemented by a Retro Remix Soundtrack by Tater-Tot Tunes, spanning 50 tracks of nostalgic 8-bit arrangements.


Yooka-Laylee and the Impossible Lair is available for Nintendo Switch, Xbox One, PlayStation 4 and Windows through Steam. From the product page:

The Yooka-Laylee and the Impossible Lair vinyl soundtrack is a 30-track collection spread across two (Yooka and Laylee-colored) LPs, with songs from David Wise, Grant Kirkhope, Matt Griffin, and Dan Murdoch. The finished product is wrapped up in beautiful illustrations by Renato Giacomini, with special sleeve and label art by Jon Kay.

Fresh off the presses, a 2LP soundtrack for @PlaytonicGames's 2.5D adventure!

The Yooka-Laylee and the Impossible Lair vinyl soundtrack is available now: https://t.co/xe7cnsVNeM pic.twitter.com/4ZjEg891O2