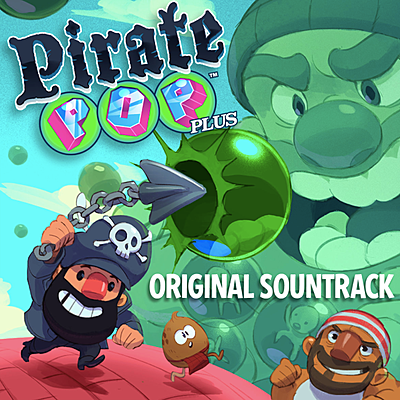 13AM Games has posted the ten-track, collaborative Pirate Pop Plus soundtrack, available for purchase through Bandcamp and Steam.

Game designer and programmer Hawken King of Tokyo's Dadako Studios published the sprite-based bubble-popper, which supports cross-buy on the New Nintendo 3DS and Wii-U consoles. Featured music tracks are by Harry Waters, Dan Rodrigues, Matthew Ivic and gyms, with mastering by Marcus Huyskens and cover art by Justin Chan. Excerpts from the music score are streaming on SoundCloud.

Pirate Pop Plus is available for Nintendo Switch, as well as Windows and Mac operating systems, through Steam.

Join Pete Jr on his quest to defeat the nefarious Bubble Pirate, an evil villain who has trapped the innocent townsfolk in bubbles! Dodge and pop bubbles with your anchor while collecting power-ups and managing Bubble Pirate’s constant gravity-switching mischief! When you feel at your Piratey-est, test your skill in the ultra-challenging Hyper Mode... The game may be faster and harder, but you'll find treasures beyond your wildest dreams.