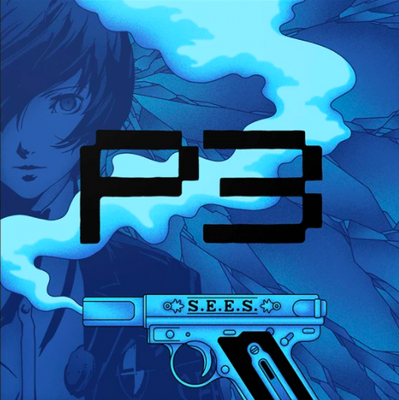 Available separately, the four-disc Persona 3 vinyl soundtrack selects music tracks composed by Shoji Meguro for the PlayStation 2 title. Scheduled for shipping in Q3 2022, the box set is decorated with album art by Drew Wise and includes a sticker sheet and postcard. Preorders are open at iam8bit, along with distributors iam8bit Japan and iam8bit Asia.

Aniplex published the Persona 3 soundtrack on two CDs in July of 2006. The 50-track digital soundtrack is streaming on Spotify and Amazon Music Unlimited, featuring vocalists Yumi Kawamura and Lotus Juice. The Persona 3 and Persona 3 FES soundtracks on compact disc ship from CDJapan.

Over 25 years, Persona has done its share of experimentation, but it’s easy to point to Persona 3 as the title most pivotal to the musical evolution of the series. In this seminal third entry, we hear an identifiably iconic style developing, where genres blend together to create a uniquely vibey audio cocktail.

Here, it’s a helping of R&B, a dash of lite hip-hop and an overall glaze of melancholy — which, oh so charmingly matches with the game’s premise of impending darkness harkening the end of the world. Fan favorite bangers include “Burn My Dread,” “Mass Destruction,” and “The Battle for Everyone’s Souls,” and other similarly forebodingly named tracks, all housed in a custom, premium box that pairs perfectly with each of the other iam8bit x Atlus releases in the Persona vinyl collection.