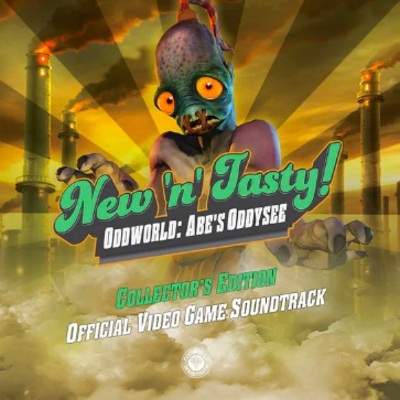 The 180-gram (clear with green marbled vinyl) release is composed, mixed and mastered by Michael Bross. Preorders have opened at distributors Light in the Attic in Seattle and PixelCrib in Melbourne, Australia.

Developed by Just Add Water, the New 'n' Tasty remake of Oddworld: Abe's Oddysee incorporates contemporary 3D visuals and sound design. The fantasy puzzle-platformer is available for Windows through Steam and GOG.com, as well as the Nintendo Switch, Xbox One, and PlayStation 4 home consoles.

The digital soundtrack is available for purchase through Steam. Excerpts from the "New ‘n’ Tasty" music score are streaming on Oddworld Inhabitants' SoundCloud channel. Cover artwork is by Raymond Swanland.

Happy Birthday to us! In celebration of our seventh anniversary, we have repressed our first vinyl release for the first time. The soundtrack to Oddworld: New 'n' Tasty is finally back in stock - this time on 180g clear w/ green marbled vinyl.

Composed, mixed and mastered by Michael Bross, the soundtrack comes in a full-coloured gatefold sleeve with RuptureFarms artwork by Raymond Swanland.